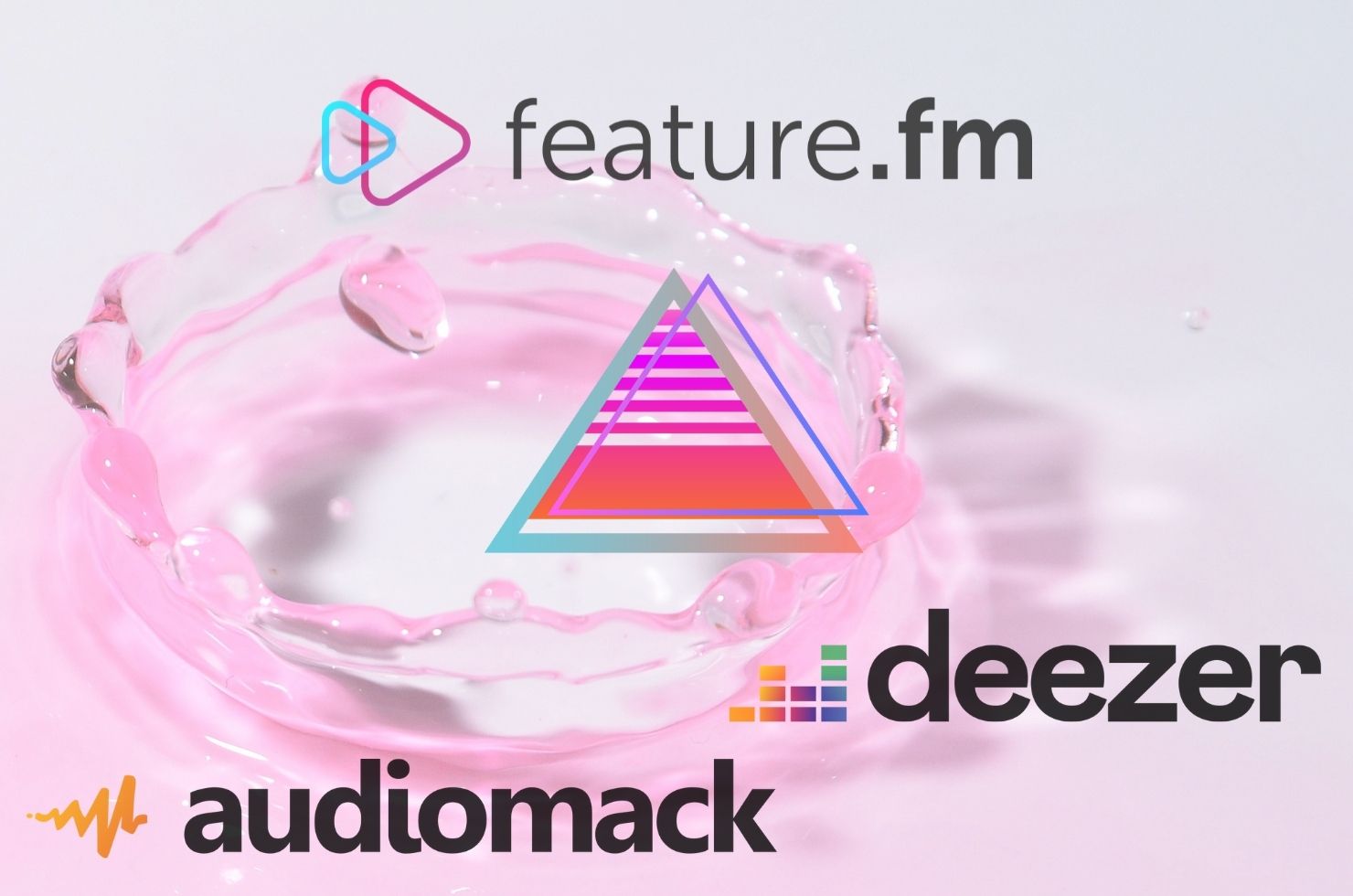 How do I promote my music to streaming?

You’d be forgiven if you thought it was 100% Facebook and Instagram ads to Spotify. I’ve written about Facebook Ads many times, and they’ve become my most popular posts.

The biggest challenge is getting potential listeners off Facebook and Instagram and over to Spotify. Wouldn’t it be great if you could promote your music directly on streaming services?

That’s becoming a reality on Spotify with Marquee, which I’ll be writing about soon. But it’s already here today on both Deezer and Audiomack, courtesy of Feature.fm.

Unlike Marquee, which prompts the user to listen to your track via a pop-up, Feature.fm campaigns automatically insert your music into the listener’s queue, where they’re forced to listen for at least 30 seconds before they can skip.

Feature.fm has had these sorts of campaigns available for years now. I tried one on 8tracks way back in 2016 and another on Deezer in 2017. Since then, Deezer has added an artist analytics dashboard called Deezer for Creators that makes it easy to see the fruits of your promotional labors.

But I’m getting ahead of myself. I’ll share all the juicy details in a bit, but first, let’s set up the two campaigns. Feature.fm let me test out $250 campaigns for both Deezer and Audiomack on their dime, and even walked me through the creation process.

I went with a tried and true song, which was at the top of my Vocal Synthwave Retrowave playlist for months because it performed so well in ads.

It shouldn’t take more than five minutes to launch a campaign. There are a total of three screens and the first is so basic (campaign name, song name, song image) that I’m not going to bother with a screenshot.

The second is devoted to targeting. We kept it pretty broad with no location, age, or gender restrictions (click to enlarge any of the images with small text):

There were a decent number of synthwave and synthpop targets including the almighty Depeche Mode, so I felt comfortable with my ability to reach potential fans.

The third and final page is devoted to budgeting. We ran both of the campaigns for one week.

That’s all there is to it!

Audiomack campaigns are more or less identical, with the same three screens.

The first potential hurdle is getting your music on the platform to begin with! Years ago, I created an account and uploaded a track that has been gathering dust ever since.

DistroKid doesn’t send your music to Audiomack by default, but they will for no extra charge if you follow the process here. Now my latest album and follow-up EP are both available, and all future releases will be distributed to Audiomack with the click of a box at the bottom of the upload page.

Targeting options on Audiomack were few and far between. We were racking our brains to come up with available targets and I’m not even sure the ones we chose were connected to the correct artist profiles.

I guess it’s not too hard to check!

I just searched and The Midnight is missing their major releases, Power Glove is an “authenticated account” with no uploads, and Erasure and Gunship aren’t there at all. Kavinsky and Caroline Polachek are legit.

The scheduling and budget options are slightly different but we did the math to make it work out the same.

It’s obvious which campaign performed better. The Deezer campaign is technically still in progress but out of budget, hence the gray dot and red end date.

What’s an engagement, you wonder?

You can see exactly when users engaged, or more often, skipped the track:

Not surprisingly, most of the skips occur shortly after the 30-second mark. Engagements are spread out over the duration of the song.

To my surprise, the engagement skewed younger and more female. Huh.

Most of my engagements were “added to favorite,” suggesting that listeners would listen to the track again. But did they?

With Deezer for Creators, we can find out!

Here are my total streams for two months, starting two weeks before the campaign. Obviously this doesn’t include the promoted plays, just organic engagement:

On the day the campaign launched, I got 19 streams. By the fifth day of the campaign, it was up to 73:

As you can see, my total streams and unique listeners were elevated for some time and are still higher today than before the start of the campaign.

The effect is more pronounced at the song level. I bet you can guess which line represents “The Limit.”

Let’s put some numbers on it:

Last but not least, what countries are these songs being promoted to? I was expecting mostly France since that’s where Deezer is headquartered, but Brazil beat it out.

I was pleased to see a decent chunk of streams to the UK and especially the US, which yielded an impressive engagement rate.

And… that’s it for Deezer!

In short, it works! People hear your song and some percentage of them like it enough to seek it out again.

We don’t earn royalties on the promoted spins, but the earned ones provide at least a smidge of ROI.

Long-term, who knows? It would be interesting to devote $10 a day to Deezer and see where things stand in six months, if only I had the budget.

If I restricted my targeting by country, age, and gender, and dialed in my genres and similar artists a little better, I bet I could build a respectable audience on the platform.

This may seem like an apples-to-apples comparison, but it’s really not.

Audiomack sponsored songs are, for now, only on desktop. A mobile option should be available in the next few months.

Another caveat is that Audiomack has its roots in hip hop. I’m not sure there’s much of an audience for synthwave.

With that in mind, let’s dig into the data!

Like I said, all desktop. A 0.18% engagement rate isn’t impressive in any context, even up against banner ads.

On the plus side, I received celebratory emails from Audiomack at certain milestones, like hitting 10K streams.

I can confirm my Feature.fm results through Audiomack’s creator dashboard. Here’s a snapshot of the past three months. See if you can spot when the campaign occurred:

Unfortunately, plays of “The Limit” didn’t bleed over to the rest of the album:

All is not lost, as I made two genuine fans, who added me to three playlists each:

DatOneDerp even commented on ROBLOX LOVER’s playlist about my song!

He also appears in my top fans:

The rest of my top fans are questionable. For starters, the default avatar doesn’t exactly inspire confidence.

The profile of my top fan with 110 plays asks users to “Follow FOR THE BEST RAP MUSIC” (his emphasis).

Adding to the overall sketchiness, my music is featured on 228 embedded players, most if not all in Nigeria:

You might deduce that the sponsored plays went mostly to Nigeria, but you’d be wrong! For better or worse, they went to the US, which rewarded me with a 0.1% engagement rate.

Nigeria came in a distant second with 393 plays. Nigerian plays from the embedded players above add up to more than that, so I’m not sure what to make of it, and I’m not particularly motivated to investigate further.

I’d be up for testing Audiomack again once sponsored songs hit mobile. For now, Deezer is unequivocally the way to go.

If you’re reluctant to put all your eggs into Spotify’s one basket, a Deezer campaign is a great way to diversify your promotional investment.

If you’d like to try it out for yourself, you can get 30% off any Feature.fm annual marketing plan using code PASSIVE30 here.

Be sure to share your results in the comments!

UPDATE 5/25/22: In the month since I published this post, two readers have seen unbelievable engagement numbers in their campaigns. We’re talking over 50% compared to my 2.2%. It appears Deezer is sending back bogus playlist add events. Feature.fm is investigating and hopefully it’ll be resolved soon.

“The Limit” continues to perform exponentially better than the rest of my catalog on Deezer. 333 streams in 30 days is a drop in the bucket compared to Spotify, but far superior to my pre-campaign numbers.

UPDATE 5/30/22: Based on Jorge’s comment below, the add to playlist reporting issue appears to have been resolved.

UPDATE 6/27/22: I attempted another Deezer campaign with my new single. I was hoping to invest a couple bucks a day, but the minimum is $10, so I went with that.

I started off with a handful of reliable countries and saw that the US was producing a 5% engagement rate, so I narrowed it to US-only and the engagement rate dropped to 1.2%

Same idea with age and gender. It seemed the more I tried to narrow the targeting to my ideal fan, the worse my results.

I ended up pulling the plug at $100, which netted me 5K plays and 76 engagements, most of which were “add to favorite.”

Here’s the breakdown by country:

And here’s the stream count for the single (actually a 7-track EP) for the last 30 days:

Clearly, the campaign had an effect. Normally my Deezer streams are negligible. It just wasn’t enough of a boost to justify the cost for me right now.

I just received an email from Feature.fm stating that the last day to launch a Deezer campaign is Tuesday, July 5. Campaigns will run until July 27. At that point, any remaining budget will be refunded.

It was fun while it lasted!