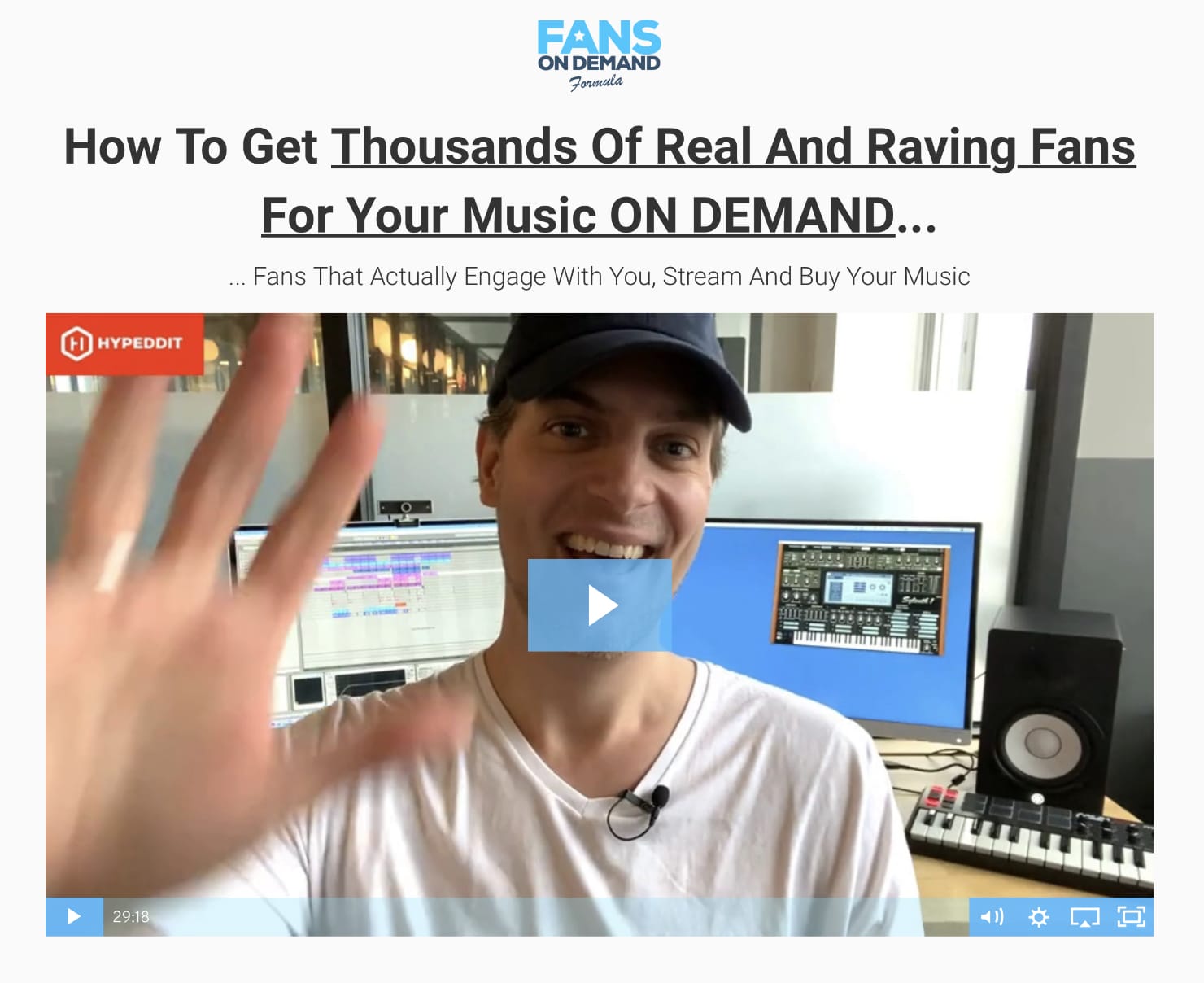 John Gold, founder of Hypeddit, recently published a course called Fans on Demand Formula, promising a thousand new fans in one week. I put it to the test!

Well, kinda sorta. I took three weeks, and experimented with different audiences more than any sane person would dare.

But hey, I completed the training and am eager to share my results! Let’s do this.

If you’re familiar with Hypeddit (pronounced “hyped it” but I still say “hype edit” in my head), you can probably guess the method we’ll use to capture those new fans: download gates.

When you click the download button, it’ll prompt you for your email address, then ask your permission to connect your SoundCloud account to follow Color Theory, like the track, and repost the track. Feel free to try it (you can always un-follow, un-like, and un-repost, meanie).

That sounds like a lot of steps, but it’s really just a couple clicks and an email address. For the first couple weeks of my campaign, I also required a SoundCloud comment, which functions as social proof to make my track look 🔥.

How are we going to direct potential fans to the download gate? You guessed it, Facebook Ads.

Of course, John holds your hand through every step of the process:

And that’s only the core of the course. There are other strategies discussed, like using Hypeddit’s Promotion Exchange, or using Hypeddit chart rankings to get even more downloads via social media.

My Fans on Demand Formula results

Let’s cut to the chase. Did I get a thousand new fans in a week?

No, I did not. But knowing what I know now, I easily could!

The shortcoming is half my fault, and half Facebook’s.

It’s my fault that I stretched the campaign out to three weeks, and targeted not five audiences as John suggests, but 34. I was feverishly searching for a way to bring down my cost per conversion (download), which averaged $2.73.

I was left with tangentially related interests like Stranger Things, 80s music, and vaporwave. Eventually I gave up and reverted to old faithfuls Depeche Mode and synthpop, but that wasn’t the audience I was hoping to reach with this track.

I opted not to use Hypeddit’s Promotion Exchange, which almost certainly would’ve resulted in many more downloads and a higher chart placement.

Why? Because I didn’t want to trade downloads with other artists who, for the most part, are likely only interested in boosting their own numbers.

It turns out people still download music. Who knew?

The Fans on Demand Formula course is worth it for the Facebook Ads training alone.

Coupling an effective ad with a download gate is surprisingly still a winning formula. You can implement this strategy over and over again, whenever time and budget permit. Ergo, fans on demand. 😬

Fortunately non-synthwave artists can do it with a much lower budget. Check out John’s results promoting a house track:

That’s $0.38 per conversion versus my $2.73. In other words, his targeting was 7x more effective. Or his track was 7x better! To be fair, I’d wager house fans are more likely to be downloaders.

If you want to give the Fans On Demand Formula a try, you can sign up for it here.

When John heard that I was planning to write about his training, he kindly provided an affiliate link for me. He didn’t have to, but he did. That means, at no additional cost to you, I’ll earn a small commission if you click through and make a purchase.

While we were on the subject, I asked John if he’d be willing to provide a discount for my readers, and he came through with a coupon code for $200 off the entire training for the first 20 Passive Promotion readers who enroll.

If you’re not sure if you’re among the first 20, head over to Fans On Demand Formula and try coupon code PassivePromoSpecial in the checkout box. If it takes off $200, congrats! 🎉

If the course doesn’t deliver, there’s a 30-day 100% money-back guarantee. The training is reasonably short, so that’s plenty of time to get results. You could knock out the whole thing, minus the bonus content, and be up and running in a day.

UPDATE 6/15/20: John has a new course called Spotify Growth Engine that’s currently priced at only $37. There’s likely some overlap, but it’s not the same system. Still, at that price, it’s a no-brainer if you want to grow your Spotify audience. Prior Fans on Demand enrollees get access to it for free.

Have you tried the Fans on Demand Formula? Share your results in the comments!