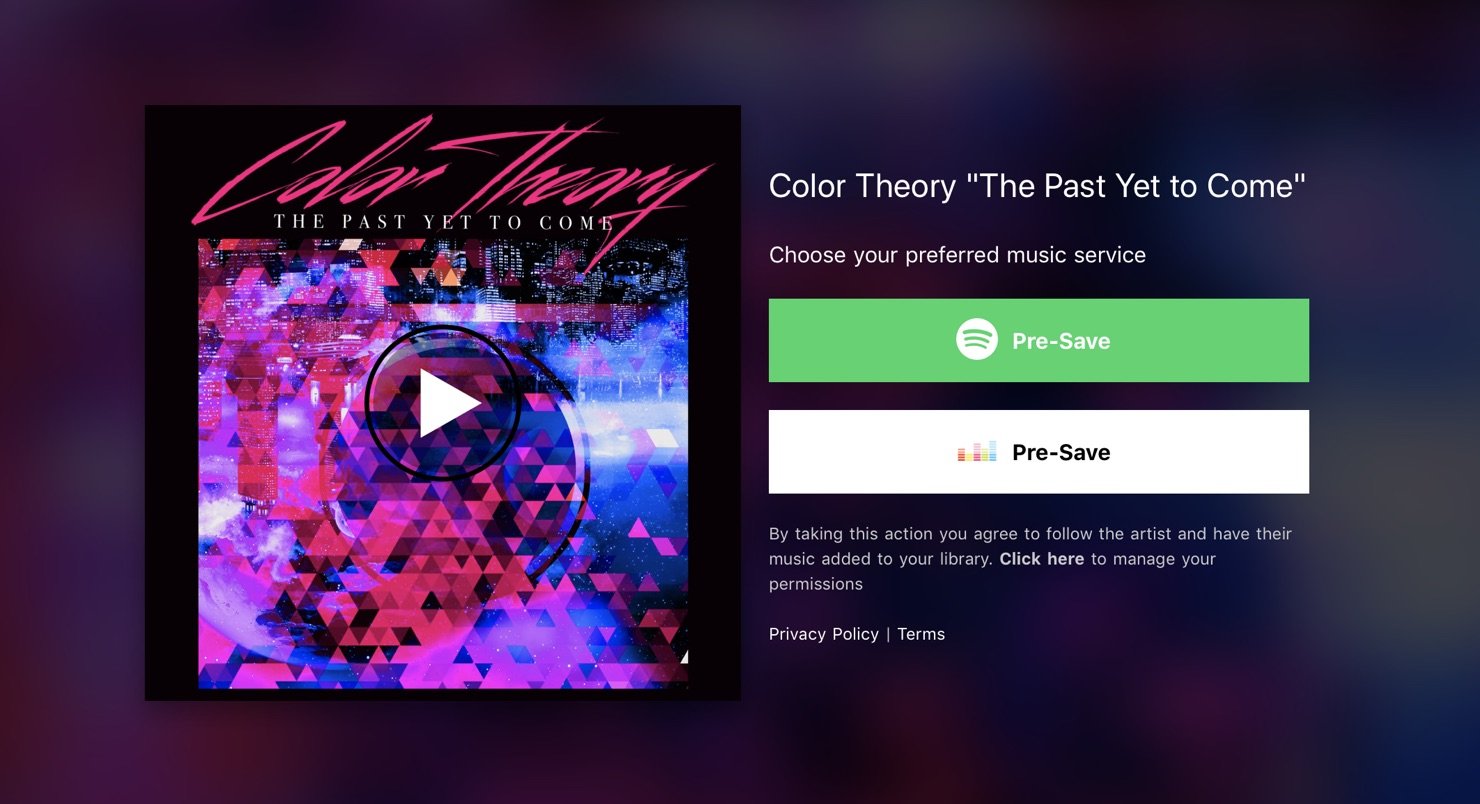 You’re probably familiar with song share links that direct fans to the music service of their choice. For example, here’s one for my last single:

There are several free and paid options. I can’t say that I’ve tried them all, but I’m partial to Feature.fm Smart Links. It’s comprehensive yet easy to use, and offers several advantages over the competition.

Setting it up is a breeze. You just paste a link to your release from a streaming service, and it pulls in the others automatically.

You can enable as many stores as you’d like, enter your own (i.e. Bandcamp), and even include links to your web site and mailing list signup form.

If you’re setting up a pre-save, you don’t need any links. Just enable Spotify and/or Deezer. Unlike several other services I tried, you don’t need to ask your aggregator for your Spotify URI.

On the next page, you specify the URL you’ll be sending fans to:

As you can see, I’ve got two custom domains, but I usually opt for a straight ffm.to link to keep it as short as possible. For example, “The Fifth of July” is at ffm.to/july and “The Past Yet to Come” is at ffm.to/thepast.

Next, you select a preview source, the display order for stores, and routing rules.

I’ve noticed that the default Spotify previews sound terrible, so I recommend hosting your own high-quality mp3 files.

Feature.fm can remember each visitor’s preferred service and direct them automatically, so they don’t even see the action page after their first clickthrough. Conditional routing rules let you, for example, send iOS users directly to iTunes.

The final page contains optional advanced settings: retargeting, affiliate programs, analytics, and links to your privacy policy and/or terms of service if you’ve got them (I don’t, and probably should 🤔).

I added my Facebook Pixel ID so I can retarget visitors with Facebook Ads, and my Google Analytics code so I can track activity on my GA dashboard.

Once you’ve finished setting up your Smart Link, it’s time to share it! You can just use the vanilla URL, but you’ll get better intel by using a separate link for each channel. For example, when sharing my link on Twitter, ffm.to/july becomes ffm.to/july.OTW.

You can even funnel a particular channel straight to a particular service. Sharing a direct-to-Spotify link on Twitter becomes ffm.to/july.OTW/spotify.

The idea is to track where every click comes from, to see who previews your track and which services they click through to.

Here’s where your diligence in sharing separate links for each channel pays off! I mostly got it right with my campaign for “Classic” a few months ago, so I’ve collected screenshots below. Bring on the data!

As you can see, only 20% of people who used my Smart Link actually clicked through to a service. I’ve seen that number vary from 8-43% across campaigns.

To a large degree, it depends on how you word your call to action. “Listen on the service of your choice here: <link>” will get more clicks to service than a vague “Check out my new song: <link>”.

Half of my clicks were from paid sources, mostly Facebook ads. The next highest number of visits came from the vanilla link, which I shared in individual emails and messages, and on platforms without a dedicated channel like Shazam, Pandora, and ReverbNation.

I even tried promoted tweets on Twitter, which I quickly abandoned after it proved far more expensive per click than Facebook ads. Google Display ads proved ineffective as well. I suspected as much, but had an Adwords credit to burn through!

Working through the tabs, we can see what channels song previews came from.

Last but not least, we can see where the clicks to services are coming from, and draw some valuable conclusions!

I’ve learned a lot about Facebook ads since then, thanks in part to Smart Links. I’d run a particular ad group for a few days, then check the results, rinse, and repeat (in retrospect, I suppose I could’ve hijacked unused channels to compare multiple ad groups simultaneously).

The point is, all clicks aren’t equal. Maybe one ad group gets a lot of link clicks, but few previews and clicks to service. Another ad group may generate less clicks yet ultimately prove to be better targeted.

Even if you don’t use separate links for each channel, you can still see where the clicks came from. You just can’t distinguish organic from paid.

What services are people actually clicking through to? In my case, mostly Bandcamp, Spotify, and YouTube.

Bandcamp is so dominant that I tested Facebook ads linking directly to it (“listen on Bandcamp here: <link>”). They performed pretty well! Even if they didn’t, I’m happy to pay a little more for a Bandcamp click.

Next up is a pre-save summary, assuming you ran a pre-save campaign. Clearly I didn’t work the pre-save angle for this particular release, but you get the idea. You can export the data in the form of custom audiences for retargeting.

Finally, location data, which again could come in handy for ad targeting or touring.

There are three monthly plans at the time of this writing:

Anyone can sign up for a free, two week trial of the Pro Plan directly within their account.

You can also purchase one-time pre-save links and pages for $35, which makes sense if you’ve only got a few releases a year.

UPDATE: Feature.fm added a free Ultimate Pre-Save feature, that allows anyone to create track (albums aren’t supported) pre-saves for Spotify, Deezer, and Apple Music. It’s a stripped down offering missing several key features, but it’s a great way to get a feel for the platform!

Should you decide to give Feature.fm a try, you can get $10 off any product and support the site by using my affiliate link.

Have you tried Feature.fm Smart Links? How do you share your music? Let me know in the comments!