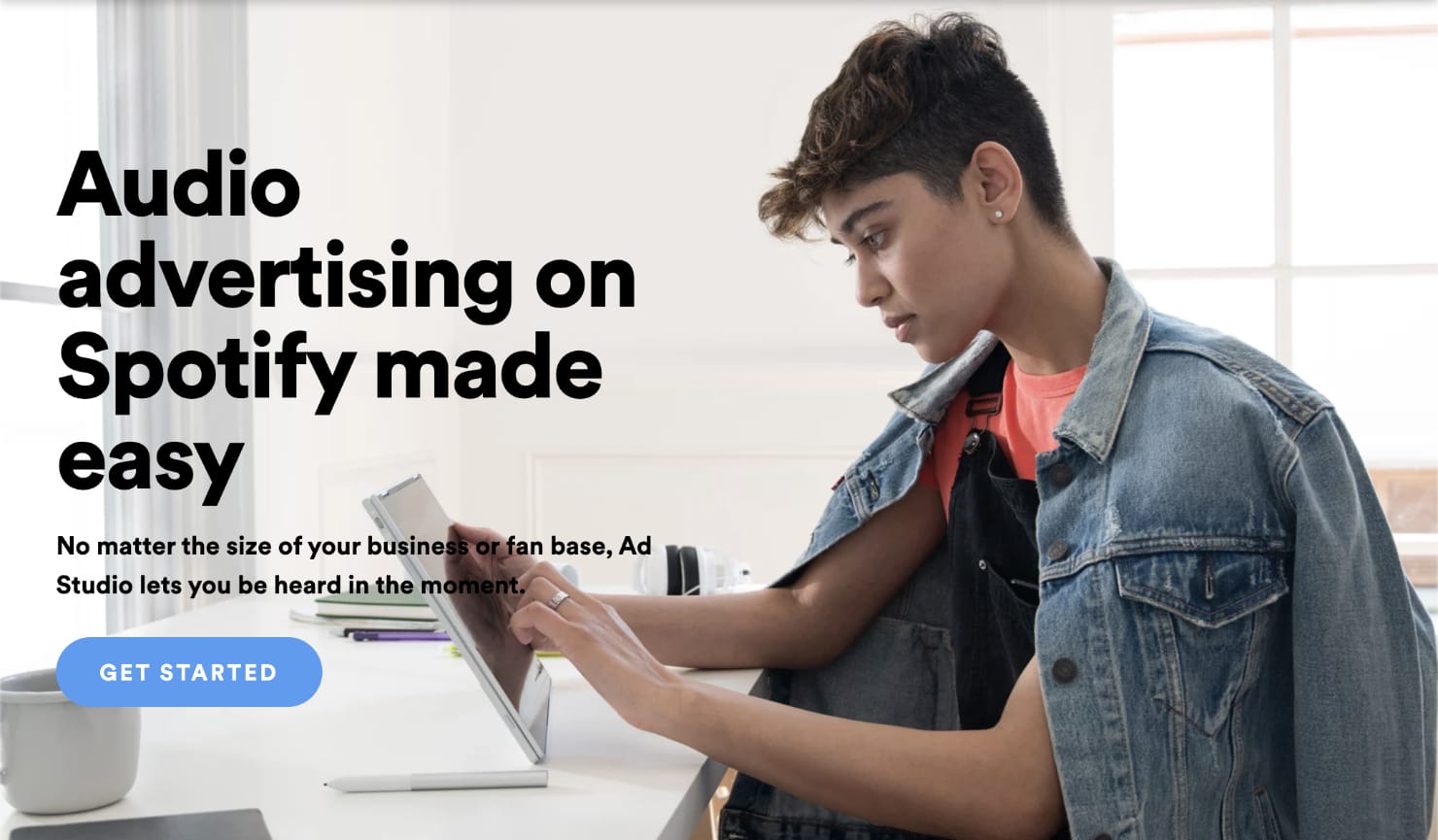 UPDATE: Be sure to check out my latest post on Spotify Ad Studio here!

I’ve been looking for ways to boost my Spotify streams. What could be better than advertising directly on Spotify with an audio ad? That way people will hear my music without needing to click on anything first. And if they hear it, they’ll like it and want to hear more, right? RIGHT? 😅

First, go to Spotify Ad Studio and sign up for the waitlist if there still is one. As of this writing Ad Studio is in beta. I didn’t encounter any bugs, but the functionality is minimal compared to Facebook Ads or Google Adwords.

Once you’re accepted and able to create an ad, you’re given two options:

Obviously we’ll go with the latter. After that you narrow down your audience by location, age, and gender. Then comes the key piece:

It would be wonderful if we could promote to fans of other bands, or even followers of a particular playlist. But, no. You can only choose the artist you’re promoting i.e. you. Assuming your artist name appears in the drop down menu, that is. Mine doesn’t, presumably because I only have 1868 followers.

My next best option was to target by genre, and the genre selections are pretty broad. I went with Electronica.

Next you can narrow your targeting to iOS, Android, or desktop, then select start and end dates.

After that comes the truly scary part…

Those are some big numbers, but I’ve got good news and better news. Let’s start with the good news. You can enter a custom budget as low as $250.

Now, $250 is still a solid chunk of change, but it’s relatively tame compared to my $500 Deezer splurge. Even if it were a total fail, it would be worth it to save you from making the same mistake.

The better news is, you can stop your ad at any time and only pay for what you’ve spent.

In other words, there’s no reason not to launch a campaign and stop at $20 if you’re not seeing the results you want.

I didn’t know that going in, and figured my $250 was forfeit the moment I submitted the campaign. My discovery to the contrary foreshadows my results, but more on that later…

And with that, the campaign is set up! There’s really not much to it.

The more cynical among us might note that the cost per ad served is more than the artist payout per stream, but let’s not go there.

Once that’s done, you upload your audio file to their specifications, which can be 15 or 30 seconds. Why someone would opt for 15 when it costs the same for 30 is beyond me!

This doesn’t apply to us, but Spotify will record the ad for you if you supply voiceover text and choose a song for background music — for free! Flipping that on its head, there’s no discount for providing a ready-made ad over having them create one for you.

Last but not least, you upload a 640 x 640 image, enter a headline for the ad, and provide a target URL that listeners can click through to.

Once you submit your ad, they’ll review it and email you back once it’s approved, which in my case was a matter of hours.

And that’s how to promote your music with Spotify ads! But should you?

Let’s talk about my campaigns, plural.

My campaign objective was to get more streams on my new single, “In Motion”. The song scored a 7.5 on Crowd Review (which I review here), which placed it in the 91st percentile, earning it an automatic feature on the ReverbNation home page. I was optimistic.

I started by emailing Ad Studio support to ask if I should target by genre or by Color Theory fans, not knowing at the time that the latter wasn’t an option. After a couple days with no response (I never got a reply), I bravely forged ahead.

I used Google Trends to see where in the US people were searching for the terms “synthwave” and “synthpop,” and targeted males 25-54 in those locations. As much as I want more female fans, I know from experience that they don’t click on my ads. 😭

Therefore, I used my official playlist as the target URL, with “In Motion” at the top.

Here’s the ad, with an unmistakable play button smack dab in the middle of my album art (it might not show up if you’re running an ad blocker):

It’s super cringey, I know. But I wanted it to be memorable, in case people hear the same ad over and over again like on Hulu or YouTube. I was destined to be the “big beautiful play button guy.”

At first, I restricted my ads to desktop users, who can play individual tracks on-demand.

After 355 impressions, I had zero clicks, so I changed my targeting from desktop to iOS.

After 607 more impressions, I had 4 clicks, so I opened it up to Android users as well, and emailed support for suggestions.

After 340 more impressions, I only got one more click, but I did get a reply to my email:

Within a half hour, I emailed back a new voiceover to swap in.

The next morning the voiceover hadn’t been swapped, so I emailed to ask if I should stop the campaign until it was:

I was worried that if I stopped the campaign, I’d lose the rest of my money. So I didn’t.

After two more days the voiceover still hadn’t been swapped, and my results were hideous:

Unwilling to continue paying $6 per click, I stopped the ad. Honestly, I’d think more people than that would touch their screens during my ad by accident!

I never received any acknowledgement or apology about the audio swap, but I did receive this email:

So of course I emailed back, explaining my predicament in full, being sure to point out that I would be writing an article about my experience. No reply. 😡

No joke, I was considering investing some of my 401k money in Spotify stock when it opened, but if this is how they treat their advertisers, forget it.

UPDATE: I just heard back from Kristina, who never received my email. Apparently they don’t know how to set up MailChimp so replies go back to the sender (hey guys, it’s under Lists ➤ Settings ➤ List Name and Defaults ➤ Campaign Defaults). 🙈

This time I went with what I considered slam dunk targeting: male electronica fans in LA that likely grew up listening to Depeche Mode on KROQ like I did. I spread out my dates to slow down the ad delivery, giving me ample opportunity to bail.

For the image I chose my most eye-catching cover art, despite the fact that it’s from a 2010 album and not the single I was promoting:

My results were even worse:

Should you advertise on Spotify?

Needless to say, there are better options.

Here’s a Facebook ad I ran for the same song (get all the juicy details here):

In my mind, it all comes down to targeting. On Facebook, I targeted US men 18-34 who had an interest in Stranger Things, Drive (the 2011 film), and Spotify. 🎯

I don’t think it’s just a matter of audio versus display ads, as my Pandora AMP messages see clickthroughs in the 5-10% range.

Until Spotify allows you to target your own followers, or better yet, your followers plus a broader lookalike audience, I won’t be running another campaign.

The question remains as to whether Spotify free users are valuable targets in the first place. Most listening is done on mobile, and free users can’t pick the tracks they want to listen to.

It’s a safe bet that the most passionate music fans, or at least the ones willing to spend money on music, are premium subscribers. Since they don’t hear ads, you can’t reach them through Ad Studio.

Put another way, how likely is it that someone unwilling to spend $9.99 per month for unlimited on-demand music will pay that much to buy one of your albums? 🤔

Have you tried Spotify ads? Thinking about it? Share your thoughts and experiences in the comments!

And don’t forget to read about my most recent experience with Spotify Ad Studio.