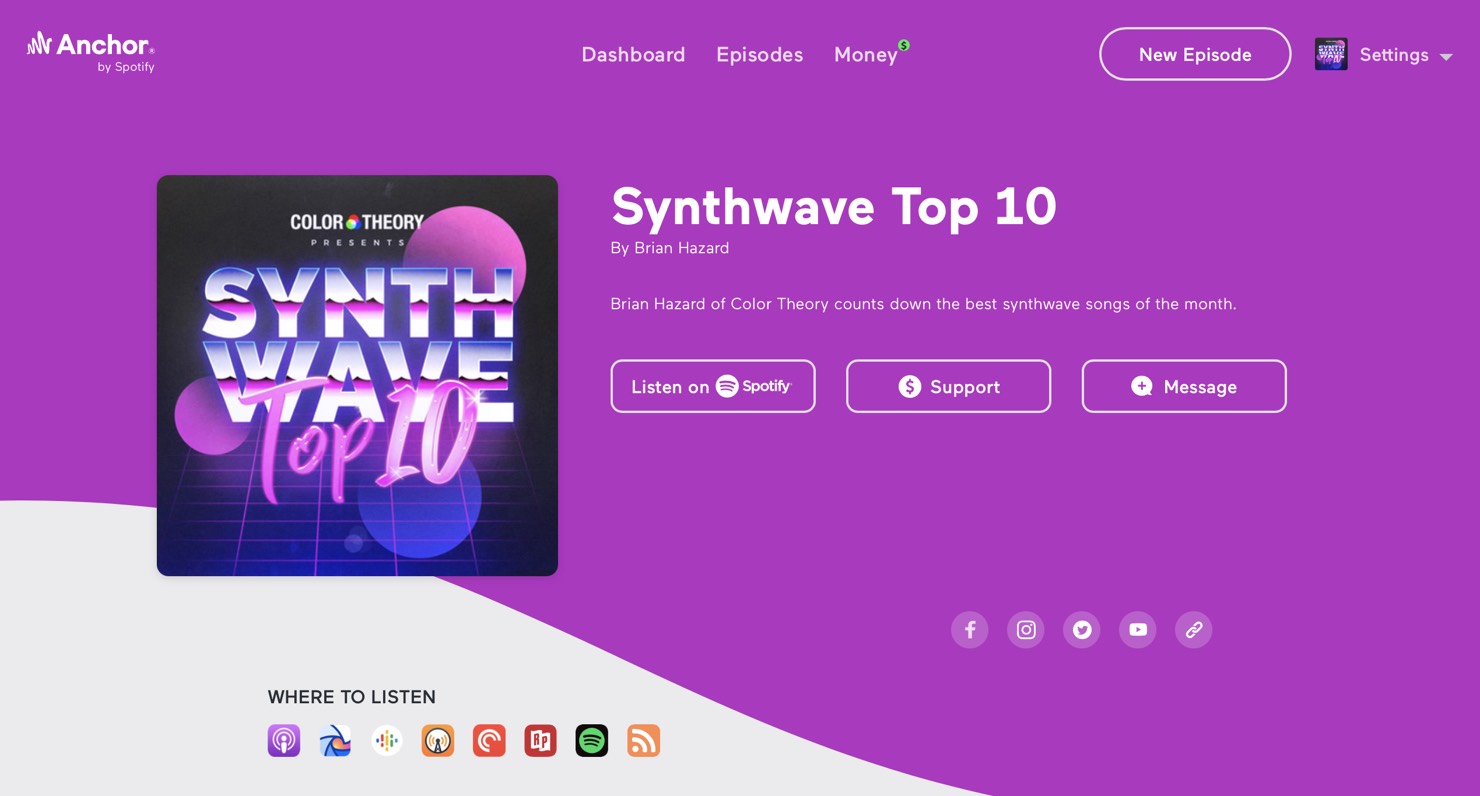 It’s been four months since my last post. Sorry about that! My new album of 80s covers with Matt Mancid has been keeping me busy, among other things.

On the promotional front, I’ve got plenty of irons on the fire, including three big reviews in progress. I share all the details in my How I’m Promoting My Music This Month email newsletter, so be sure to subscribe if you haven’t already!

While I prefer to focus on sites, services, and strategies that can benefit as many musicians as possible, this time I’m just going to share my latest relatively niche project. If it helps you, great!

As most of you know, I curate a playlist called Vocal Synthwave Retrowave.

As of this writing, it’s creeping up on 21K followers. I spend hours working through submissions on SubmitHub every week, and a good chunk of change promoting it with Facebook ads.

I thought it would be fun to highlight the best of the best with a top ten countdown like the ones I used to listen to as a kid. The way I remember it, Duran Duran’s “The Reflex” was always number one, but I tuned in anyway.

I started by reaching out to the graphic designer who created my playlist cover art, and hired him to do something similar for the countdown.

With that financial commitment in place, Synthwave Top 10 was born!

Next I purchased the synthwavetop10.com domain and pointed it to a dedicated page at colortheory.com. If it ever blows up, I’ll give it its own site.

That page contains a brief overview, listening instructions, a detailed FAQ, and a mailing list signup form to be notified when new episodes drop.

I still haven’t figured out how to refer to Synthwave Top 10, beyond not slapping “THE” in front of it. It’s more than a playlist, not just a podcast, and not quite a “show.”

If you’ve got any ideas, let me know! I’m all ears.

There are four ways to tune in to the not-quite-show:

I couldn’t believe how easy it was to get a podcast up and running! No joke, you could do it in ten minutes using Anchor.

In most contexts, if I’ve settled on a particular platform it’s because I’ve exhaustively tested and compared them all. In this case, I just happened to hear of Anchor when Spotify purchased them, and thought their Music + Talk format sounded promising.

My big issue with most music podcasts is that the audio quality is terrible. I go to great lengths to maximize audio quality by purchasing the original tracks from Bandcamp and applying no processing beyond volume adjustment.

Anchor’s Music + Talk format handles the music portions of your podcast directly through Spotify, for the best possible audio quality.

The downside? You can’t host the podcast on other platforms like Apple Podcasts or my favorite, Overcast.

That was a deal-breaker for me, but I went forward with Anchor anyway. Rather than creating a Music + Talk podcast, I just uploaded a single high-quality mp3 of the entire episode.

They distribute my podcast to all major platforms for free, and even offer a “support the show” feature where listeners can donate, not that I expect that to happen.

You can find my podcast on Anchor here and listen to it on Spotify here:

I post the same audio on SoundCloud. So far I haven’t run into any copyright issues.

People tend to use YouTube for background music, so my uploads here contain just the music over a simple visualizer.

I’m currently hosting ST10 alongside Color Theory material on my own channel. Someday it may get its own.

Finally, I’ve got a vanilla Spotify playlist with the order reversed. So it’s more of a… count-up?

One of my tracks is always at the top of my Vocal Synthwave Retrowave playlist. That way when someone clicks through from Facebook or Instagram, they hear the same song they heard in the ad and know they’ve come to the right place.

But what about including my own tracks in the top ten?

I can’t very well rank my own stuff, but I don’t want to disqualify it either. I landed on this compromise:

If I’ve got a new release, I include it as an unranked bonus track and call it a “dishonorable mention.”

Synthwave Top 10 is a fun and relatively painless way to promote artists in the synthwave scene, myself included.

The last episode took a single afternoon to produce, if I don’t count listening to my playlist on daily runs to familiarize myself with the contenders.

Should listenership continue to grow over time, I could take it in any number of directions:

I’m open to your ideas! How can I make it better? Lay it on me in the comments!