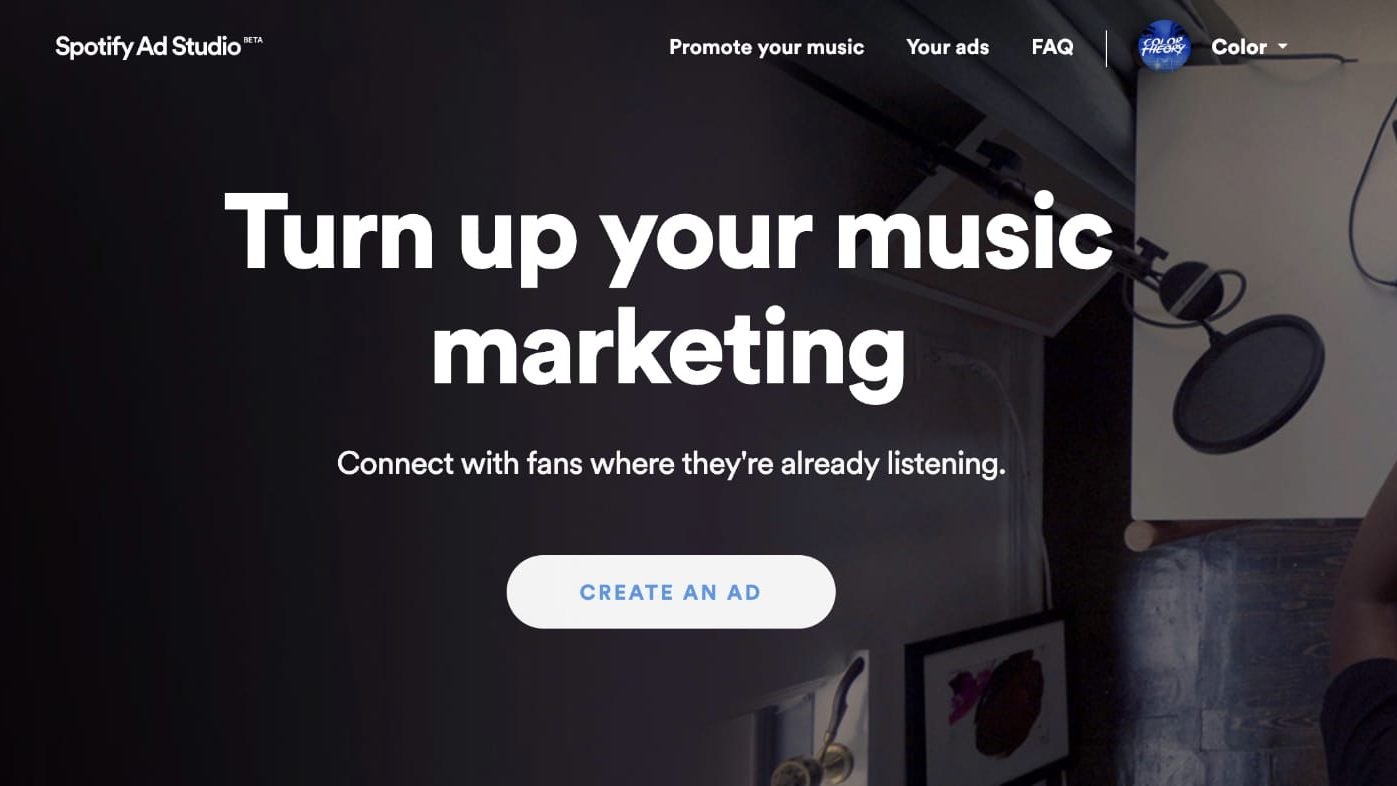 For the first time, I could make potential fans hear my music. If they liked it enough to click through, my entire catalog was at their fingertips, AND I’d earn royalties on every play. Maybe I’d even earn enough to pay for the ads! What could be better?

My results, for one. It’s hard to see how they could’ve been worse.

I chalked it up to a lack of targeting options. I wasn’t able to target fans of specific bands, or even reach my own fans. Instead I was stuck targeting the overly broad and ambiguous “Electronica” genre. I’m not sure what “electronica” even means these days, but that was clearly the closest option to synthwave.

Recently I learned that you can now target fans of specific bands. The giddiness returned.

Was my enthusiasm justified? Read on.

I’m not going to walk you through the ad creation process like I did last time, since little has changed.

Instead I’ll share my ad and the thinking behind it. It’s pretty straightforward.

I left the high-level targeting rather broad, because last time I didn’t see any benefit to further restricting age, gender, or platform.

This time I was able to specifically target fans of The Midnight, who are the center of the synthwave bullseye for me. Most synthwave is instrumental, so being able to reference another artist with male vocals and a focus on solid songwriting was exactly what the doctor ordered.

One cool feature of Ad Studio is that they’ll record your ad for you if you provide the script. Last time I did it myself, but I figured a female voice would prove more enticing to the overwhelmingly male synthwave fanbase.

Here’s how it turned out:

I don’t see how the ad could be any better:

If you disagree, let me know how I can improve on it and maybe I’ll try out your suggestions!

Here’s how the ad looked on mobile:

In a word, glorious. Let the clicking commence!

The first version of this article was posted a month and a half ago. My results were pathetic due to a bug in their platform that switched the targeting from “The Midnight” to “Genre – All”.

Luckily, you can stop ad delivery any time you want, without exhausting your entire budget.

Here are my “Genre – All” results after five days, at which point I pulled the plug:

What percentage of listeners would you guess clicked through? 10%? 2%? Nope.

Not even one-tenth of one percent.

24 new listeners, meaning people who hadn’t listened to my music in the past 28 days, listened to an average of 2.3 songs. That’s 55 streams for nearly $80.

Hours after the post went live, support let me know about the bug, and eventually refunded the $80 I spent.

It took a few days to get another ad up and running, because the same script I used in my first ad was rejected.

That one started off with, “Are you a fan of The Midnight?”

I mean, how perfect is that? The answer has to be “yes” because my target is… fans of The Midnight.

Turns out I had to settle for less than perfection:

Makes you wonder why the first ad was approved, or why the voiceover team recorded it in the first place. I’ve seen Spotify ads tutorials that call out other artists by name!

Despite that handicap, I was still quite pleased with the results.

What jumped out at me is the frequency. With Facebook Ads, I’ll typically disable an ad set long before the frequency gets that high.

I emailed support to ask what I could do to bring it down. Here is their response:

Yes, that frequency is higher than the average we would see (2-3). This is the average over the lifetime of the campaign however. We have a cap in place on a daily level so as not to play too much to the same user. If you wish to bring down the frequency, I would recommend opening up the targeting. The ad is delivering at a higher frequency because this audience is on the smaller side. Here are some options:

• Changing fan targeting to genre targeting. I’m aware however that you may not want to do this based on our discussions about your previous ad.
• Add some other artists to fan targeting that would be similar to The Midnight. Adding some artists with larger listenership but a similar audience/style would help a lot.
• Open up the age targeting.

Give one of those a try and hopefully it will help with the frequency.

So on July 30 (about halfway through the campaign), I added several other synthwave artists:

It didn’t really help, likely because everyone who is a fan of those other artists is also a fan of The Midnight. They are to synthwave what Nirvana is to grunge, Metallica is to metal, Star Wars is to sci-fi, Tolkien is to fantasy, and Kermit is to frog puppets.

Are you impressed? I’m impressed!

Let’s do a little back-of-the-envelope math:

I didn’t expect the streams to pay for the campaign, but hey, they covered about an eighth of it!

The post campaign window is intriguing. If I’m understanding it correctly, people heard my ad during the campaign, and then listened to my music as much as two weeks later.

Did they just happen to remember to look me up? That strikes me as unlikely. I emailed support for clarification, because I didn’t see anything in the FAQ. Their response:

Correct, we have a two week attribution window. So if someone who heard your ad listens to your music up to 2 weeks after the ad played, they will be attributed as a new listener from your ad. This would be common practice in a lot of advertising including display ads you would see on Facebook, Google, etc. Listeners may not always click on your ad there and then as they may not be able to (driving, working out, etc while listening) but our research has shown that they may listen to your music at a later date.

Now that I think about it, that makes sense. I often save stuff I read about online to a “check out” playlist to peruse later.

A solid percentage of those new listeners likely became new followers, as my follower count went up quite a bit:

I can’t attribute that all to the ad campaign though, as I’ve been running multiple Spotify PR campaigns. Details to come!

Intent rate is defined in the FAQ as: “The percentage of listeners who took actions showing intent to stream the artist again in the future. Actions include saving the artist’s music (by tapping the heart icon or “save”) or adding it to a playlist.”

Finally, here’s who my ad was served to. Recall that I restricted age to 25-45.

The moral of the story is: targeting matters.

Specifically, appropriate targeting brought my 0.09% conversion rate up to 9.80%, and my “stay away from Spotify Ad Studio at all costs” recommendation up to “give it a shot!”

I’ll be doing just that in a couple weeks with a new 4-track single, and if that produces positive results, with a new album in October.

I’ve got a couple suggestions to improve the platform for artists:

Feel free to add your own suggestions, and share your results, in the comments!