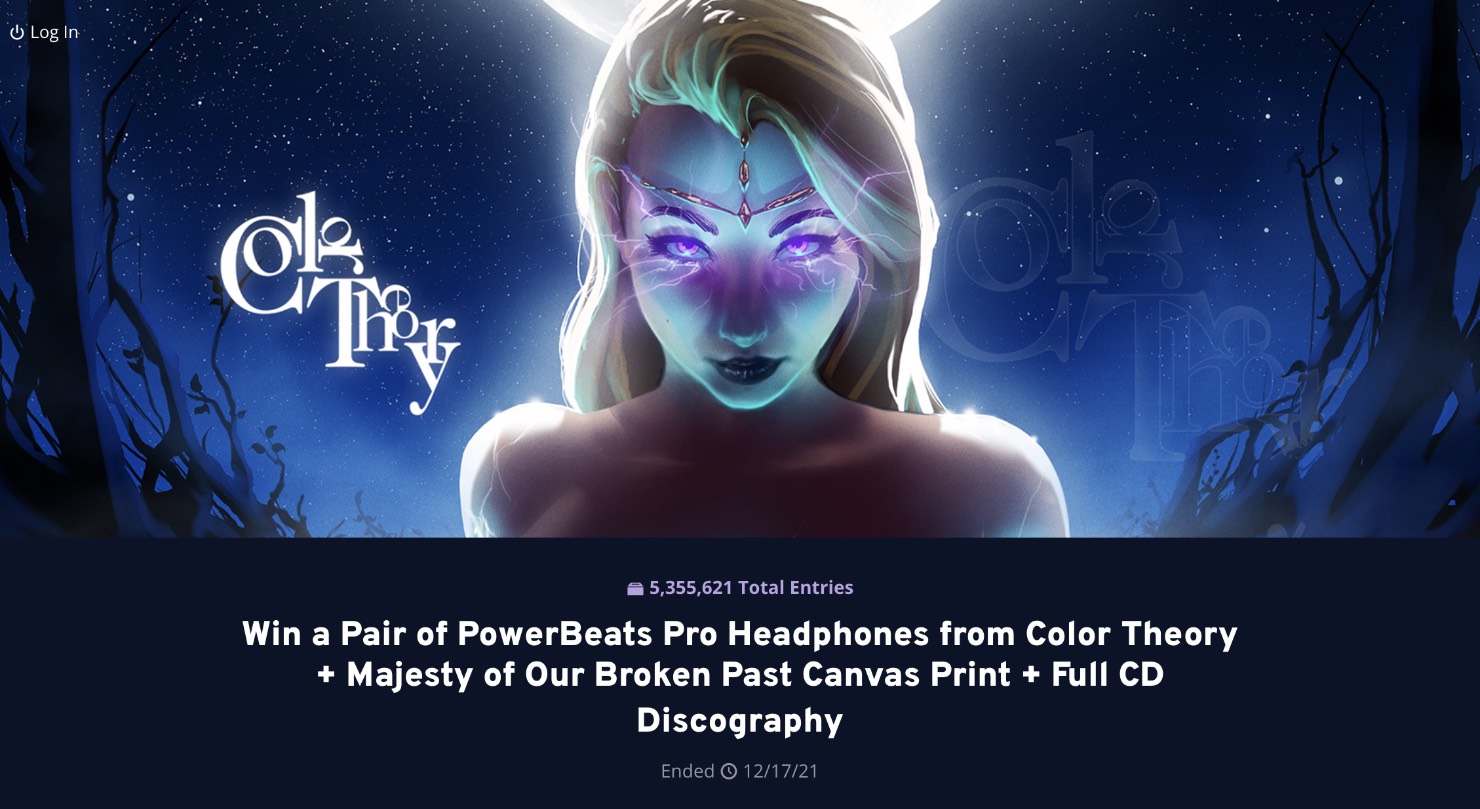 Tunespeak is a loyalty platform for musicians where fans earn points by performing various actions like streaming tracks, watching videos, and referring friends. Those points serve as entries in a raffle. The more points a fan accumulates, the better their chances of winning a prize.

I reached out to Chris Rhein, the Head of Artist Relations, to chart out a giveaway I hoped to launch within a month or two. Five months later, I was finally ready!

Let’s say I offered a $500 Amazon gift card as my grand prize. I’d get a mountain of entries, but the vast majority of entrants wouldn’t care about my music. Oh yeah, and it would cost me $500!

At the other extreme, if I offered only Color Theory memorabilia, I’d be unlikely to interest anyone beyond my current fanbase.

The sweet spot is somewhere in the middle: a widely enticing offer that disproportionately attracts potential fans of my music.

In the end, we settled on these four prizes:

Base pricing is based on the number of followers on your most popular social media platform. Less than 50K followers is $375.

You might wonder why I’d go with Tunespeak over cheaper options like Gleam (my review) or Rafflecopter. There are several advantages.

For starters, there’s the aforementioned consultation. That level of personal attention is part of every package.

Next, they do all the setup. I emailed them a few graphical assets and they took care of the rest. There was plenty of back and forth, including tweaking the point values of actions to best reflect my goals.

That level of support continues over the course of the campaign. Emails were replied to within a couple of hours, sometimes minutes. I routinely requested CSV files of new mailing list subscribers and got them right away.

When I released a single, launched a sale on my site, made my Black Friday offer, and finally released the album, they added new actions for entrants to earn points.

Best of all, they recruited the vast majority of entrants:

Their marketing generated 60% of the 880 enrollments, and kept the entrants coming back throughout the course of the campaign with email updates like this one:

Plus dedicated emails at key points along the way, like my album release:

I mean, what synthwave fan wouldn’t want a nice pair of headphones? I figured it would be an easy sell. I was wrong.

I quickly decided it just wasn’t worth it. I wasn’t willing to pay $1 per entrant, much less per landing page view.

My contest was only open to US and Canada residents, which explains why my ad costs were so high.

I had fans from Russia and Thuringia (yep, it’s a real place) enter, but they were ineligible to win.

I found out after launching that I could’ve included the UK at no extra cost, and France and Germany for an additional fee due to the extra legal work and translation.

My bad for not asking, but that oversight may have saved me hundreds of dollars in shipping fees!

My giveaway ran for a full two months, closing three weeks after my album release.

Here is a sampling of the actions entrants could take to earn extra entries and increase their chances of winning a prize:

Since Patreon is my main source of income as a recording artist, I assigned a massive point value to becoming a patron. Tunespeak has no way to verify whether or not someone actually follows through. It’s all on the honor system.

199 entrants earned points for the action, but I only actually got one new patron from the giveaway. Two if you include a longtime fan that finally decided to join.

The dishonesty wasn’t as widespread as it might appear. I told current patrons they should go ahead and click the button since they did “become a patron” already. In the early days of the campaign, Tunespeak only asked users to confirm that they visited the site.

That didn’t change the fact that some people lied to gain an unfair advantage. Once that became clear, I asked if we could lower the point value.

It turns out that for legal reasons, they can’t change point values or remove actions once the campaign is live.

As of this writing, 340 of the 540 mailing list subscribers are still with me. Last week I explicitly invited them to unsubscribe if they’re not genuinely interested in me or my music.

Only two of those mailing list subscribers spent money in my shop, generating three orders for $63 total. One became a $6/month patron.

Here’s how the Spotify plays broke down:

Keep in mind that entrants had only three weeks to stream the full album up to 3x/day for 3000 points.

Last but not least, Tunespeak shows me all of the contestants and their point scores. One stood out far, far above the rest:

That one entrant was responsible for the majority of referrals and earned points for the actions his referrals took, hence the exponential growth.

I really enjoyed my Tunespeak campaign, and I think my fans did too! The US and Canada residents anyway.

The team is fun to work with and the cost is fair considering the level of service and marketing reach they provide.

I’d argue Tunespeak is worth it based on Spotify engagement alone. 20 days out from the album launch, here are my Spotify 28-day numbers for the release:

The three new tracks are 5, 7, and 9. The latter is the focus track that I selected in Spotify for Artists, which I put at the top of my Vocal Synthwave Retrowave playlist on release day.

The two new and otherwise unpromoted tracks have 2.5K streams total, 1.1K of which are from Tunespeak. They’re both doing well on Release Radar, and I’d wager those 1.1K complete streams have something to do with it.

I’d absolutely do it again, though probably not right away for fear of hitting the same Tunespeak email subscribers.

Have you tried Tunespeak or hosted a giveaway? Share your experiences and recommendations in the comments!