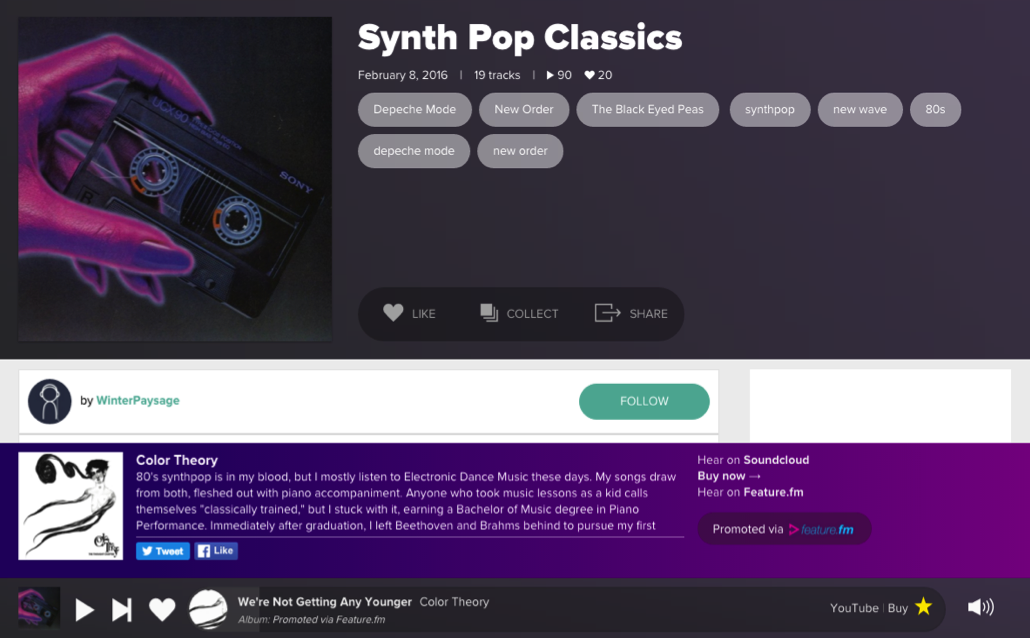 UPDATE: Since writing this article, 8tracks disappeared and recently relaunched, so I’m not sure how much of this still applies. You can also promote your song on Feature.fm through Deezer. Read about my experience with that here. Right now my favorite Feature.fm feature is Smart Links.

Every musical artist wants their work to be heard. Many are happy to give it away for free. Some are even willing to pay for people to listen, even if the cost is never recouped.

If you’re looking to increase your YouTube views or SoundCloud plays for vanity purposes, there are dozens of options. To play your songs to potential fans, I know of two.

I’ve covered Radio Airplay (previously Jango Airplay) extensively, and will be revisiting it soon. The other is Feature.fm, a relative newcomer and the subject of today’s post. Earbits, Last.fm, and Grooveshark no longer offer paid campaigns.

How much does Feature.fm cost? Less than 2 cents per play. Unlike competing services, you’re only charged for plays over 30 seconds. About 40% of my plays never made it that far, so they were on the house.

Where do Feature.fm plays occur? They plan to bring other streaming partners onboard, but their sole partner right now is 8tracks. 8tracks hosts millions of user-created playlists which anyone can stream for free.

Feature.fm doesn’t just inject your song into the middle of a playlist. That would be rude! Instead, it places it between playlists, which explains why the percentage of listeners who don’t make it past 30 seconds is so high. They may realize their playlist is finished, and either select another or exit  the site completely. If they do make it through your song, 8tracks automatically selects another playlist for continuous listening.

A huge bonus is that Feature.fm streams your song through SoundCloud’s API if you provide the link. In other words, every Feature.fm play counts as a SoundCloud play! I’m happy to spend $10 on every upload for the approximately 600 play jumpstart. All those free plays under 30 seconds still count towards your SoundCloud play count.

I was able to confirm my SoundCloud plays by temporarily signing up for a Pro Unlimited account ($15/month), which provides detailed stats.

Over the period I promoted the song in question, Feature.fm was responsible for 5,048 out of 6,138 plays. The top websites column lists dozens of 8tracks playlists (click image to enlarge).

Setting up your campaign

Once you specify the artist and name your campaign, there are three main screens:

The Song Upload page is pretty straightforward. They’re working on a feature to help artists choose the best tags. In the meantime, ask yourself, “What would people search for to find my music?”

Whatever you do, don’t leave that SoundCloud URL blank! If you don’t already have a SoundCloud account, now’s the time to create one and upload the song there first. It’s going to look mighty popular over the next few days.

The Targeting page allows you to drill down on who will hear your song. In addition to gender and age, you can select the countries you’d like your song heard in, and even specific states in the US.

Daniel Sander, Head of Market Development at Feature.fm, recommends always targeting by location. It doesn’t cost any extra, so why not? My best performing campaign by engagement targeted California, New York, and Utah. Bet you didn’t know that indie synthpop is big in Utah!

On the other hand, Daniel doesn’t recommend setting any age or gender restrictions until they integrate more streaming services. While 8tracks won’t play your song to listeners they know fall outside your specified range, few listeners provide demographic info. I tried targeting males 40-50, my key demo based on other sources. My results showed less than 0.2% of listeners were known to meet that criteria.

8tracks users are split about evenly male/female, and the vast majority are 18-35. That’s a key demographic that’s tough for traditional marketers to reach, and likely what you’re aiming for anyway.

You can select from four calls to action, or create your own. Daniel recommends going with a custom CTA, even if it’s just “like me on Facebook,” because the big green custom CTA button performs better than the ubiquitous standard Facebook button. In the campaign shown above, I linked to a free download of the song.

My message to users was a short bio, but you could just as easily share the story behind the song or album. I suppose you could also include another call to action, though URLs aren’t hyperlinked.

Last but not least, the Budget page determines your spending rate. I highly recommend you set a daily limit, because you can easily burn through thousands of plays in a single day, even with a highly targeted campaign.

That’s it! Most likely, your song will be approved and plays will start within an hour or two.

That $220 generated 12,043 plays, for an average cost per play of $0.018. That includes 471 organic plays, which occur when a listener adds your track to their playlist, and another listener hears it there. Organic plays continue to accrue after your paid plays run out.

For a play to count as organic, it must be the direct result of a specific Feature.fm campaign. I ran three campaigns on the same song, and organic plays are tracked separately for each. Your song may very well be in the 8tracks catalog already (mine are via CD Baby), and getting regular spins, but those don’t count.

Engagements, meaning listeners clicking on stuff in the overlay that accompanies the song, were relatively sparse. Here’s the breakdown from the campaign above, with the custom “Free Download” call to action:

Is Feature.fm worth it?

Clearly the engagement numbers alone don’t justify the $40 spent from a return on investment standpoint. Those 46 clicks are unlikely to generate $40 in sales. Of course, if one listener buys my discography on Bandcamp for $70, all bets are off. Feature.fm is working on allowing listeners to share their contact info, which will tip the scales further.

Throw in the 2,248 plays on 8tracks, which also count on SoundCloud, plus the potential for future organic plays, and I’d say that yes, Feature.fm is worth it.

I know from experience that many of these listeners will become genuine fans, just as Radio Airplay listeners did. For example, here’s a new fan who liked my song enough to follow up with Feature.fm directly:

And a couple more who commented on my song on YouTube:

It’s clearly superior to a traditional radio campaign, like the one I spent $4,000 on with literally nothing to show for it.

I asked Feature.fm for a discount code, and they set me up as an affiliate. If you’d like to try it out for free, you can support this site using this link, or click on the banner below.

For it to be truly free, you’ll need to opt for a weekly budget and cancel before the second week starts and your credit card gets charged. You sneaky devil you!

Obviously $10 worth of plays isn’t going to make or break your music career. Daniel at Feature.fm suggests investing at least $50 to see an impact.

There’s a lot more to Feature.fm and 8tracks, but your eyes are already starting to glaze over.

Spotlight – An ongoing Feature.fm campaign to fan-fund your song plays and engage with fans.

8tracks – Why not include your songs in your own playlists, and get plays for free? As you can see, I’m already giving it a try.

Regardless, I’ll report back with my results over the coming months as I continue to use the service.

Have you tried Feature.fm? What do you think? Share your questions, thoughts, and results in the comments!