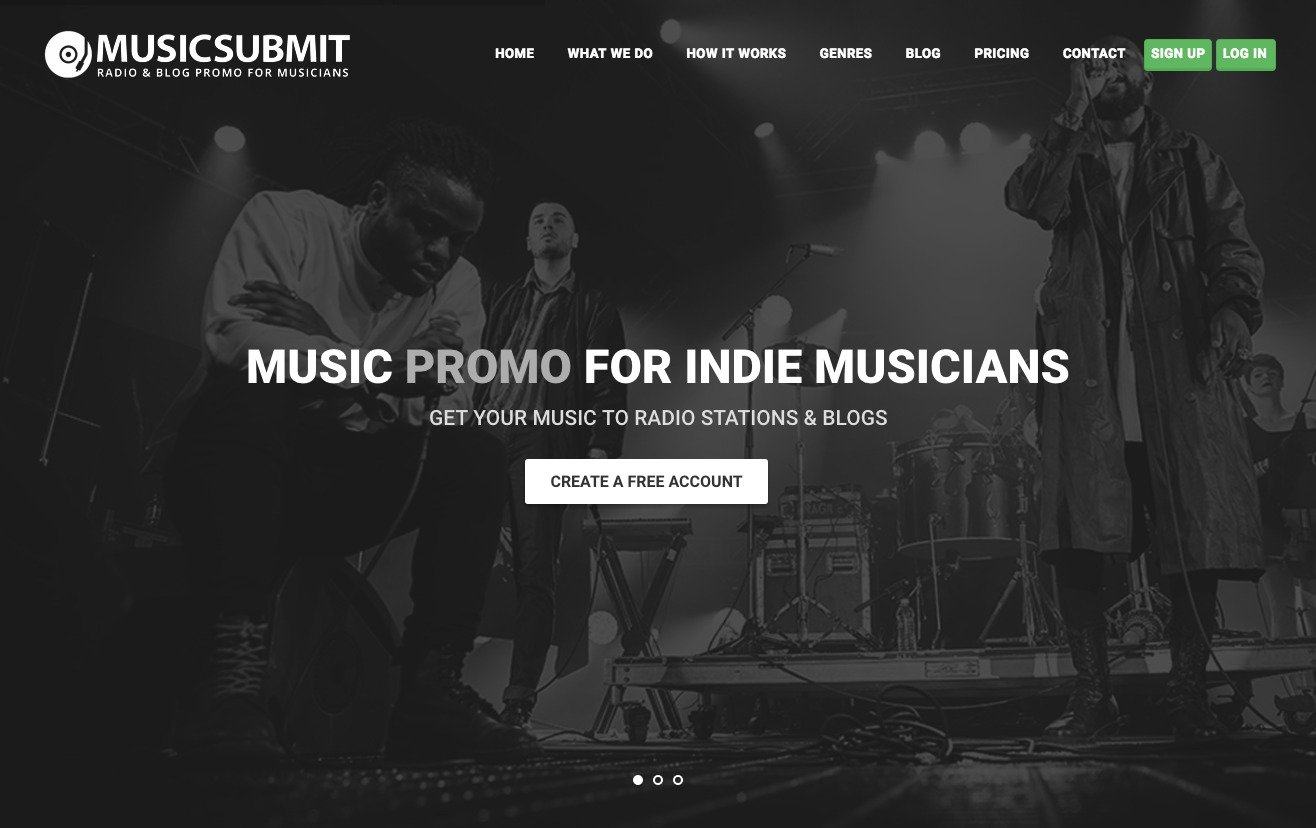 MusicSubmit is a music submission platform, similar to recently reviewed SubmitHub, but with a broader reach. They too cover music blogs, but their primary focus is online radio.

CEO Michael Corcoran credited me with 25 “Best Shot” submissions to give MusicSubmit a spin.

Now sit back as I share my journey from painful anonymity to online radio glory. Approximately.

Your music is presented to reviewers in the form of an electronic press kit, commonly known as an EPK. MusicSubmit calls it a Music Press Kit, or MPK. Close enough.

It took me all of 10 minutes to create mine. Fill in some basic info, links to socials, and a bio, upload 1-4 songs and images, and copy/paste an embed code for a YouTube video. If you’ve got a press release, you can add that too. I didn’t, and I’m told most don’t.

Here’s what my completed EPK looks like. See it live here.

Once you launch your campaign, you’ll receive an email notification each time your music is submitted to a reviewer. The bulk of my submissions went out within two weeks.

To be clear, the “reviewer” is the person who listens to your music. They may be a reviewer for a music blog, as the term implies, or they could be a DJ, music director, etc.

Let’s see what MusicSubmit looks like from a reviewer’s point of view:

Upon logging in, the reviewer is presented a list of recent submissions. Mine is conveniently located at the top of the page. Click through and the first song starts playing automatically.

After listening for at least 15 seconds, the reviewer can approve, reject, or defer (“maybe”) their decision. When they click approve, a pre-populated letter appears, which they can modify to suit the particular submission.

As with SubmitHub, the reviewer receives $0.50 per submission for their time and attention. If they limit their listening to the required 15 seconds per submission, they can earn $120 per hour!

One would think that when a reviewer approves the submission, said reviewer would then proceed to download the songs, photos, and other desired assets from the EPK that’s literally right in front of them. One would be wrong.

In fact, everyone who approved me asked me to send my music to them again, some on CD!

In practice, MusicSubmit is a pre-screening tool. Approval is an invitation to submit directly to the reviewer off-platform.

Here are my results, a month and a half since starting my campaign. Reviewers have 60 days, so more could roll in, but I’m not holding my breath.

The Best Shot Lite package promises a 30-50% review rate. Again, “review” just means they listen to at least 15 seconds of the track. I ended up right on target with 44%. Put another way, my submission was ignored by 14 out of 25 reviewers.

My music was accepted by 6 reviewers and rejected by 5. The site won’t show you who did the rejecting, but if you call Michael and ask nicely, he may tell you!

Unlike SubmitHub, MusicSubmit doesn’t require the reviewer to share a reason for their decision. Can we at least get a “you suck” button? 😜

Here are the reviewers who accepted my submission:

Planet Earth Records – From what I can tell, this “station” is just a player on a Geocities-themed website. I can’t get it to play in either Safari or Chrome.

I’ve never heard of Boys’ Entrance, but they must be pretty good to take the top four slots. Yet they only have 14 monthly listeners on Spotify. The show must not get many requests.

Crisher Entertainment – Looks to me like they’re using MusicSubmit as a vehicle to sell their services. Their acceptance letter says, “After we receive your Press Kit, we’ll follow your career advancement via our contacts in the music industry and social media.” No mention of radio play, and btw you already received my press kit! 😡

The Discover Music Radio Show – A directory of stations, most broadcasting online at 48 kbps! Remember in the early 90s when 128 kbps was marketed as “CD quality”? They’ll get there someday!

Detroit Promo TV – Their website requires Flash, so you know it’s a winner. They sell $25 pop-up ads on their homepage. Are they a radio or TV show? Facebook says TV show. Their Twitter profile, 937 followers strong, is littered with ad sales and sponsorship requests.

Who is MusicSubmit good for?

With the possible exception of Bear Radio, my 6 acceptances are unlikely to move the needle in any measurable way. Their acceptance letters are the same types of solicitations I receive by email and Twitter DM on a daily basis, and for the most part, choose to ignore.

There was a time when I would pursue and follow up on every lead, however small, because “you never know.” And it’s true – you never know, but there are far more marketing opportunities online than one person could ever hope to pursue.

MusicSubmit’s roster for electronic music is extremely limited at this point. Normally submissions are split between radio and blogs about 70/30. In my case, all but one was radio.

MusicSubmit is a perfect fit for rookie artists looking to build up a press portfolio. Established artists should scan through this sampling of stations and blogs and decide if it’s worth the effort. SubmitHub is a better bet for pitching to popular blogs, and particularly for charting on Hype Machine.

Have you tried MusicSubmit? Share your thoughts and results in the comments!

After my review went live last August, CEO Michael Corcoran offered to submit my music to sites in Alternative and Pop rather than Electronic and Dance. My music doesn’t fit neatly into either set of genres, and their roster of Alternative and Pop outlets is stronger.

So, seven months in the making, here are my final, final results:

The Mess Hall – A show hosted by Seraya Young on 100.3 FM community radio in Australia. Looks like the name of the show changed to Bay Drive at some point.

INDIE104 iRADIO LA – Named Best Internet Station of the Year in 2006, 2007, and 2008 at the Annual New Music Awards in Hollywood, according to their about page. Never heard of ’em. The site also features a submit page where you can send them your music for a small fee, which I never recommend doing.

Sonic Breakfast – The reviewer later clarified that he may or may not actually review the stuff he approves. In fact, he sometimes forgets why he accepts some things in the first place. My song appears to have fallen into that category.

Music Zeitgeist – This music blog posted a full artist profile on me. It’s basically a cut-and-paste of my bio, but still, it’s a prominent feature with a SoundCloud playlist embedded. Much appreciated!

Burning Flame – Another blog feature, this time just a short paragraph of bio and links to my socials. An audio embed would have been nice, but I’ll take what I can get.

The total cost for all submissions would’ve been about $56. Sounds like a bargain to me! If your music doesn’t fall through the cracks genre-wise, you’ll likely see much better results.