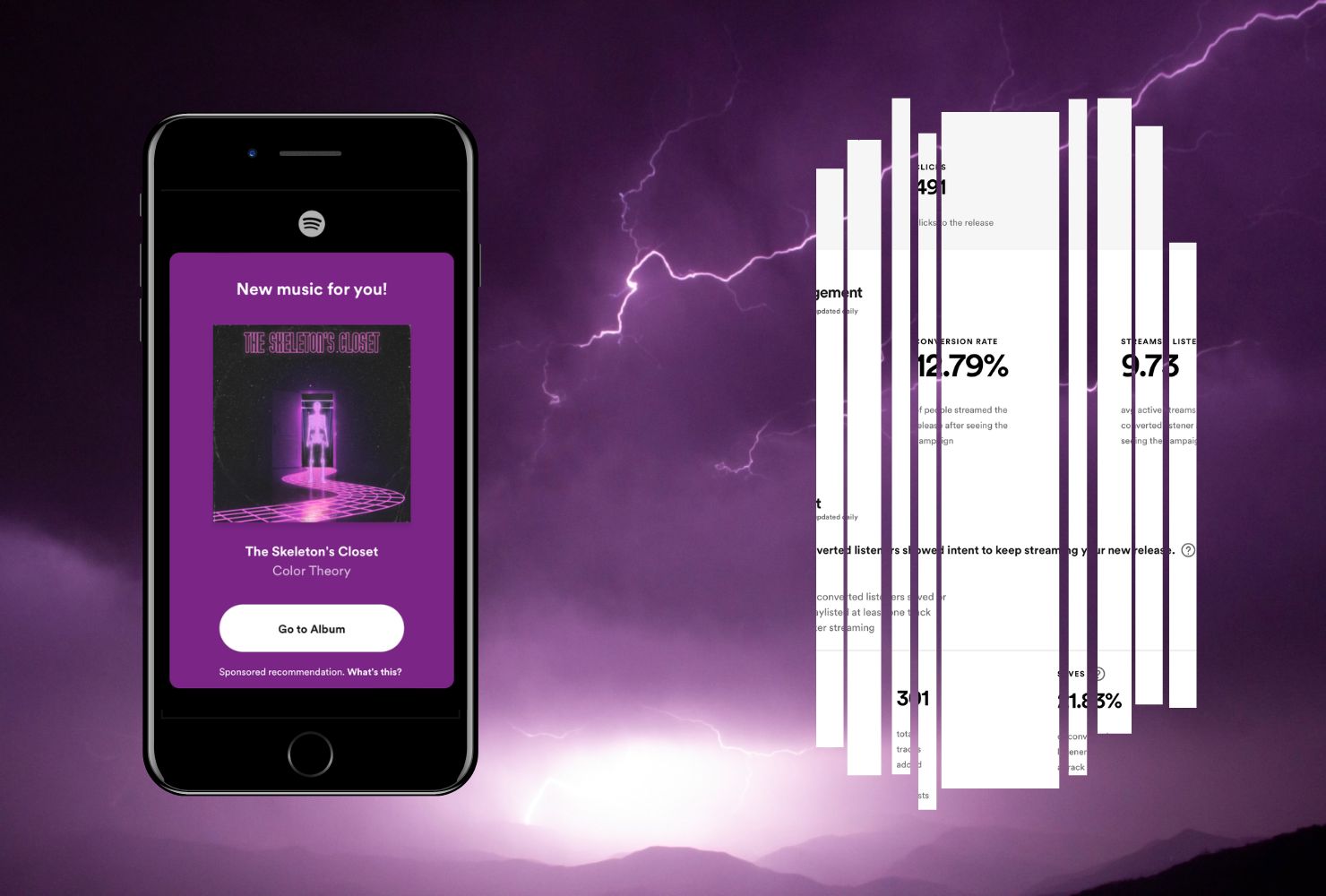 Over the course of many posts, we’ve established that I can get potential fans from Facebook and Instagram to my latest release on Spotify for about $0.20.

Today I’m going to make a case for paying $0.50 to do the same thing from within the Spotify app instead.

Let me back up…

There are two ways to promote your music natively on Spotify: Ad Studio and Marquee.

I’ve written about Ad Studio twice, most recently in 2019. As a direct result of that post, Spotify flew me out to Brooklyn for an interview, parts of which made it into their artist education video series, The Game Plan.

I haven’t used Ad Studio since, but they recently emailed me an offer for a $125 credit. I’m tempted to try advertising my Vocal Synthwave Retrowave playlist or Synthwave Top 10 podcast.

Marquee is the new kid on the block, still in beta. To qualify, you need at least 15K streams in the US over the past 28 days, or more than 2.5K US followers. Additionally, your billing address has to be in the US.

The way it works is that when members of your “reachable audience” (more on that later) open the Spotify app, they’re greeted with a full-screen recommendation to check out your new release, like so:

If they click, you’re charged $0.50. If they don’t, you’re not. In both cases, Spotify tracks whether or not they go on to stream the release.

It looks like targeting will soon expand to more countries:

The link is to this form, which I just filled out myself!

Campaigns run for 10 days or until your budget is spent. My two completed campaigns, which I detail in full below, both ran 8 days.

Just like with Ad Studio, if the campaign isn’t living up to your expectations, you can pull the plug and only be billed for what you’ve already spent.

Campaign creation literally couldn’t be easier, in my case anyway!

At this stage in my career, the only thing I can tweak is the campaign start date.

The release is already selected and the start date defaults to release day, I think. You can create your campaign up to 18 days post-release.

Looking back on my campaigns, the two completed ones started the day after release, and my current one the day of. It may be better to wait until after your die-hard fans have a chance to listen, but I don’t have any data to support that hypothesis.

If more listeners were interested in my music, I could select specific segments of that audience: recently interested listeners, casual listeners, and lapsed listeners. For that higher degree of specificity, I’d pay $0.55 per click instead of $0.50.

As it stands, I only have the option of selecting my entire reachable audience, which was 2109 listeners at the time of my first campaign.

For my second campaign, it was 2856 listeners. My current one was around 4K (I forgot to take a screenshot). If I create a campaign today, I’m at 4418 listeners. Progress!

How Spotify determines the size and scope of that audience is a mystery. I assume it uses the same internal metrics that drive algorithmic playlists and Fans Also Like.

At 4418 listeners, I can still only select my entire reachable audience, which is fine. That’s what I’d opt for regardless.

Again, no real options here. I could enter a larger number, but it wouldn’t get spent.

My first campaign was less than spectacular, for reasons I’ll explain below.

Since this was a single, it only reached premium users, because free users can’t pick and choose tracks.

195 people streamed the release after seeing the full-page recommendation, averaging 2.34 streams each for a total of 456 streams.

But that’s not all…

A quarter of those 195 listeners saved the track or added it to a playlist, demonstrating an intent to listen to it in the future.

Spotify also reports how those listeners engage with the rest of your catalog, which is arguably the whole point. We want fans, not just pricy streams.

It stands to reason that these campaigns are unlikely to pay for themselves.

To be fair, this particular release wasn’t an ideal test subject. It was a double A-side containing two covers that were already released as part of my Depeche Mode tribute reissue a year and a half prior. I didn’t announce it to my fans or otherwise promote it.

Worse, a key synth part somehow didn’t make it to the final mix of “Sometimes.” I can’t overstate how devastating this omission was, right at the climax of the song (you can hear it at 2:09 here).

I’ve since replaced the track on Spotify, which sadly required a new ISRC. I lost my stream count and playlist placements in the shuffle.

Let’s move on before this gets seriously depressing!

My second campaign was for a follow-up EP to my last album. It contains 6 b-sides and 5 remixes for a total of 11 tracks.

Since the release is categorized as an album, the campaign reached both free and premium users. Free users can only listen on shuffle.

Perhaps that explains the 4x improvement in streams per listener. Free users may be holding out for specific tracks, like the opener.

As you survey these substantially larger numbers, keep in mind that the campaign cost twice as much!

The conversion rate went up by 2%. Maybe the artwork was ever-so-slightly more appealing, or more listeners made it past the 30-second mark, or both.

This campaign generated fewer playlist adds and saves on my other releases, but more listeners and streams. 49 listeners x 11.92 streams per listener = 584 streams, to be exact.

If I had to choose between Facebook Ads to Spotify or Marquee (and I kind of have to since I’m not made of money), I’d choose Marquee.

Compare those 1400 streams to this:

Spotify gives me over 8K streams for free, precision-targeted to the users most likely to enjoy my music.

And that’s not even factoring in geography! Most of my Facebook Ads conversions come from Mexico, Brazil, and previously, Russia.

In contrast, two-thirds of my algorithmic streams come from the US:

Spotify introduces new listeners to my music who I retarget with Marquee to grow my reachable audience.

That’s how I think it works anyway. I have no other explanation for how my reachable audience went from 2109 to 4418 listeners in just over two months, with no substantial change in monthly listeners or playlist placements.

Implied endorsement. When Spotify recommends your new release, it feels more like a suggestion than an ad. In reality, it’s both! Marquee only reaches users likely to be receptive to your music.

Deep, useful data. We finally have a way to reliably measure fan growth on the platform and the relative performance of each release. “Reachable audience” may just be the one metric to rule them all.

US-only. If you’re not in the US, you’re out of luck, for the time being anyway. I look forward to the day when I can target Brazil and Mexico at a lower cost per click.

Walled garden. There’s no reliable way to engage with your reachable audience beyond additional Marquee campaigns. These “fans” aren’t attending shows, buying merch, or otherwise supporting you in any financially meaningful way.

For now, I’m going to continue promoting my playlist with Facebook Ads and my new releases with Marquee.

If that gets too expensive, I may need to restrict my Marquee campaigns to album releases.

Have you tried Spotify Marquee? Share your thoughts and questions in the comments!