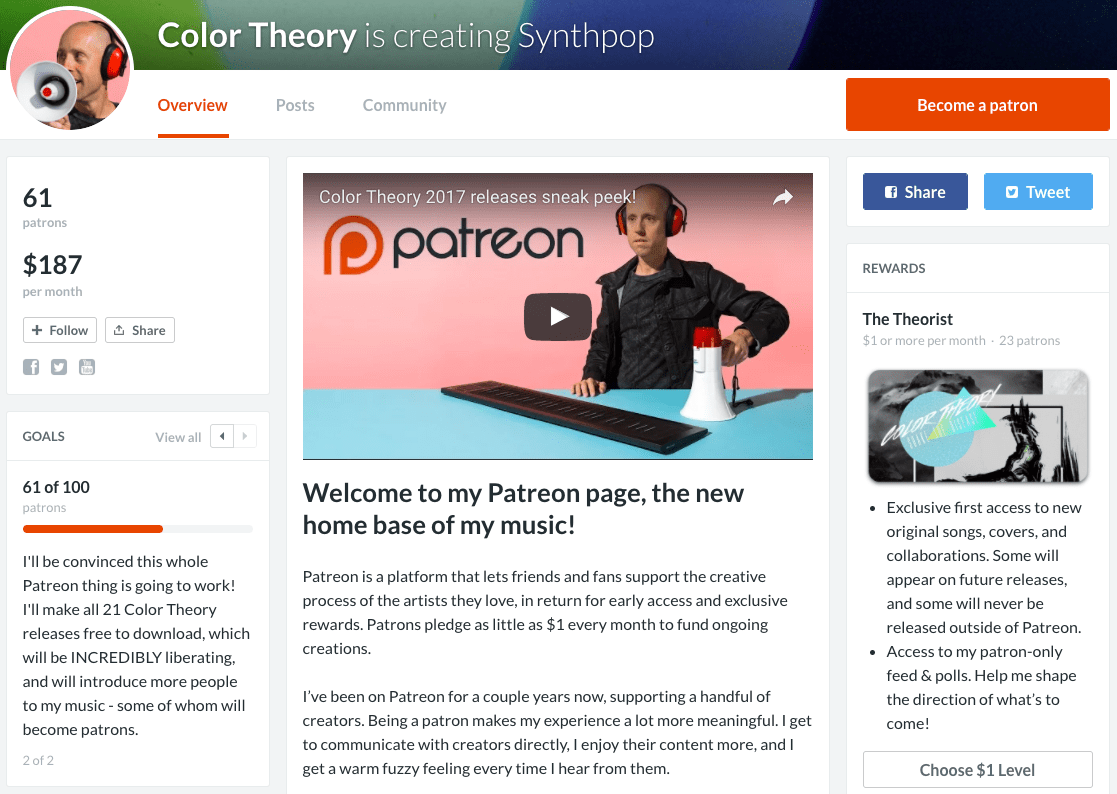 Once you’ve experienced the convenience of having the entire history of recorded music in your pocket, why would you go back to schlepping files around? 50 million paid subscribers agree.

Thus, it is with great sadness and a heavy heart that I pronounce the CD dead.

What’s a recording artist to do?

Hold back? Keeping my material off Spotify and YouTube is a losing battle. Streaming is the future. The data I’ve seen suggest that streaming actually boosts sales, rather than undercutting them.

Tour? I don’t perform, though I did for a few years in the late 90s. It’s not for me. It’s crazy tough to turn a profit, even for big names like Rihanna. Plus I’m not keen on sleeping in my car.

Merch? I’ve got partnerships with GearLaunch (t-shirts) and Modify Watches. Sales are few and far between. For the most part, my fans just want the music.

Kickstarter/PledgeMusic? I’ve already written about my distaste for the glorified preorder route. It forces you to decide exactly what you’re going to make before you make it, and know precisely how much it will cost. If you meet your goal (and half don’t), making and fulfilling rewards from a dozen different tiers is expensive, time-consuming, and soul-sucking.

Patreon is different. It’s a membership platform that makes it easy for artists and creators to get paid. Patrons pledge as little as $1 every month to fund ongoing creations, the vast majority of which are released into the world for free. It’s like public radio without the pledge drive.

How I discovered Patreon

Back in 2014, I was playing a lot of Dark Souls II. One of the great things about gaming today, versus my formative cartridge and floppy disk years, is the community that surrounds the games. Lots of people were posting Dark Souls videos on YouTube, but the guy with the Australian accent was doing it best.

When I finally clicked through to VaatiVidya’s Patreon page and realized how much work goes into each of his videos, I was more than happy to chip in. As his patron count increased, he was able to afford custom artwork for his video thumbnails, and even commission songs based on the games (I’m available Vaati!). I’m still proud to support him, even though I’ve hardly touched a Souls game in over a year.

Once I got a taste of the exclusive access, mutual gratitude, and enthusiastic community, I was hooked. I’ve been supporting a handful of creators on Patreon for a couple of years now — running and science channels, anime reviewers, an illustrator, a podcaster, and yes, even a few musicians!

For the price of a cup of coffee, it takes my experience to the next level. I enjoy creators’ content more, I get to communicate with them directly, and I get a warm fuzzy feeling every time I hear from them.

Which is why I’m excited to announce the launch of my own Patreon page!

What I’ve learned in a week

Goals. These need to inspire, and I’ve got a lofty one! Once I hit 100 patrons, I’m going to make my entire 21-release discography, currently $105 on Bandcamp, free to download. I want to make all my music free for anyone in the world to enjoy, and trust that those who do will value it enough to support it.

Rewards. My average pledge is $3. Nobody has pledged at the $25 or $50 level yet. The lesson here is to offer the best rewards at a price people are willing to pay! I’ve had several people tell me they’d love a signed CD-R every six months, but $25 per month is just too expensive. [edit: I’ve since dropped it to $10]

Payment schedule. You can opt to charge either per month or per piece of content. Initially I planned to charge per song, which would grant me the freedom to devote my energies to other projects, without stoking the ire of my neglected patrons. But the whole point is to release more music! I could use a little pressure, not to mention a reliable income stream.

Charge settings. The way it currently stands, someone can sign up and download all your content, then cancel without paying a cent. To prevent these sorts of shenanigans, Patreon is rolling out a feature called Charge Up Front, which charges patrons immediately when they sign up, and then on the 1st of every month thereafter. The only potential point of friction is if someone signs up near the end of the month, they’ll be charged twice in the span of days.

Earnings visibility. Another new feature is the option to hide your earnings. I elected to go that route at first, but it was a mistake. Transparency breeds trust, and it’s not like I’m secretly making a killing. It was just a way to shield my ego from potential embarrassment.

Audio RSS feed. If you enable it, each patron gets their own individual private feed containing the audio they have access to. All they have to do is copy/paste the URL into their podcast app, and boom! You’re a podcaster.

Recruiting for dummies. The homepage always has a “get patrons” box at the top, with a button to share your latest paid post or rewards tier, or give a shoutout to a new patron — complete with a graphic served up just for the occasion. If you don’t like the option it gives you, hide it and refresh the page to serve up another.

Built-in cross-promotion. When a creator supports another creator, their patrons receive an email notification. I always click through to find out what’s so great about them!

Want to try it for yourself?

If you’re thinking of launching your own page, please use my referral link to sign up! We both earn a reward based on how many patrons you have 30 days after launch, up to $500 for each of us.

Be aware that you only have 30 days after signing up with my referral link to launch your page. If it takes longer than that, you can always use the link again to sign up with a different email address.