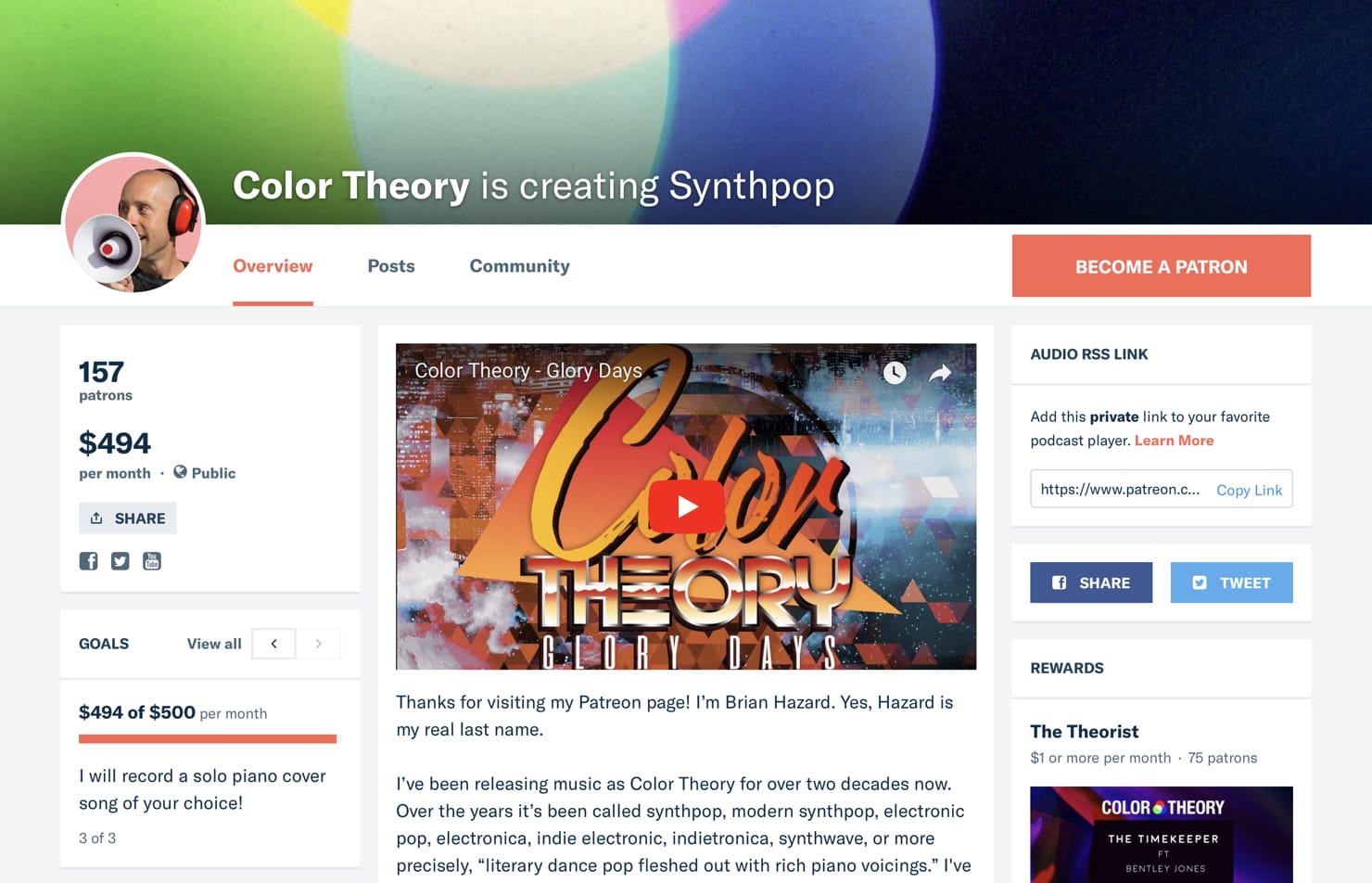 Patreon consumed my last year. Between launching my page, promoting it, and delivering on what I promised to patrons, there was little time left for other musical or marketing activities.

These days, most of what I make from my music comes from patrons. Starting at $1 per month, they get exclusive first access to new songs, demos, remixes, instrumentals, lossless downloads, quarterly video Q&As, signed CDs, private Skype chats, and special thanks in the credits of new releases.

That said, I think most of them only care about the songs, and some aren’t even interested in those! More on that later…

Things I love about Patreon

Prolificness. My previous album/EP set took six years, which breaks down to one new song every five months. Last year I released a new song every month: 10 songs to patrons, and 6 singles worldwide. Granted, 4 of those were collaborations and/or covers, and 8 of them were already complete or nearly so, as my launch video teased:

Today it’s a different story. I have no backlog, and no sneak peeks to offer. I’m hoping to track vocals for next week’s release this afternoon!

Freedom. Before Patreon, I was always working on my next album, with clear direction and constraints. Now I just need a song. If that song isn’t worthy of official release, then it’s a patron exclusive! That hasn’t happened yet, but just knowing I have the option is liberating.

Last year I recorded four synthwave tracks, potentially for an album. Right now I’m not feeling the synthwave thing. Maybe I’ll change my mind next month, or maybe I’ll decide to move on and release the completed tracks as an EP. If I’d gone the Kickstarter or PledgeMusic route, I’d have been committed to complete a synthwave album.

Community. I can’t overstate the value of having a dedicated group of fans who are intimately familiar with, and literally invested in, my work. When I’m stuck, I can ask or even poll them. Patrons aren’t just along for the ride — we’re all in this together.

For example, last week I was struggling with vocal styling: how to apply vibrato tastefully without it getting too “Broadway” or “Disney” (as described by several Crowd Review listeners). I provided an mp3 of my singing a couple lines two different ways and asked for their preference. One patron even referred back to my vocal performance on a 1997 release!

Meaning. Sometimes we all wonder… why am I doing this? For example, when browsing other artists’ monthly listener counts on Spotify.

Now I’ve got a clear mission to fall back on, as stated on my Patreon page: To create a body of work that patrons will treasure, that uniquely reflects who I am as an artist and as an individual.

Money. I’ve been hovering between $450-500 per month for the last six months. At the beginning of the month, I always get a handful of declined payments, which are gradually compensated for over the course of the month with new pledges. Few patrons actually delete their pledges, but some do occasionally lower (or raise) it.

Aspects of Patreon I struggle with

Money. I’d be lying if I said I hadn’t expected more. I can name 50 people who bought everything I released over the past 15 years, that haven’t signed on. And I have no idea why, because…

Chilling effect. When someone asks for money, the natural thing to do is look away. That couldn’t be easier to do on the internet — you just don’t respond!

Case in point, I sent out an email blast to 12K fans asking:

You’ve heard me go on and on about Patreon for two months now, but you haven’t become a patron. I’d love to know — totally anonymously — why, and how I can do better.

Please spare a minute to take this quick (and again, anonymous) survey

With a hard-to-miss “TAKE THE SURVEY” button just underneath. I got five responses, and zero meaningful intel.

Worse, now those fans won’t email me about anything or engage on social media, I suspect because they don’t want to call attention to the fact that they aren’t supporting me (if you’re reading this, it’s okay! I still love you 😘).

Ambiguity. Due to said chilling effect, I simply don’t know how to convert fans into patrons. I’ve tried hiding/showing my monthly earnings, tweaking the language on my page, uploading truncated versions of patron releases on SoundCloud, and plenty more.

Nothing results in a huge spike of new patronage, nor would I expect it to. Yet how else can I determine what works?

Rewards. Believe it or not, Patreon doesn’t provide play/download counts. If I knew what percentage of patrons were downloading new songs, or better yet, downloading the lossless versions, I could use that info to refine my reward tiers.

My guess is that most patrons aren’t interested in the rewards at all, even the songs. They’re happy to wait until the songs are on Spotify or Bandcamp, or hold out a new album. They just want to support me without necessarily getting anything in return.

Which is wonderful! I feel the same about most of the 17 creators I support on Patreon. I love what they’re doing, but don’t have time to keep up.

By way of proof, I offer up my last video Q&A, which was available for 162 patrons to watch. It has a grand total of 6 views according to YouTube. Nor did anyone take me up on the 30-minute Skype call, a top tier reward.

I’d love to offer rewards that fans actually want, but what little evidence I have suggests that they only want music — if that. My average pledge is $3, which is low compared to other creators.

On the other hand, I don’t think I could get away with simply dropping the reward tiers, because they at least offer the perception of value.

Windowing. Managing one release schedule for patrons and another for the rest of the world is a pain. I suspect some patrons would rather I release everything at the same time, so that they could listen on the platform of their choice. But who knows how many patrons I’d lose without early access and exclusivity?

Uncertainty. As many of you know, Patreon recently announced fee changes and then backed down in the face of overwhelming creator and patron outrage. I lost four patrons and had one lower their pledge, but some creators lost hundreds of dollars per month.

Not only has Patreon lost the trust of their community, but they are committed to further changes, presumably because they can’t continue to grow on a 5% share of pledges.

What comes next for the platform is out of my hands, but I’m sticking with Patreon for now! I’m convinced that patronage is where it’s at, and there’s no better option to date.

This year I’m going to focus on the quality of my content and hope that my patron count increases as a result. Writing and recording a new song every month doesn’t give me time for much else!

Your thoughts and advice as a fan, artist, or fellow Patreon creator are welcome and encouraged! 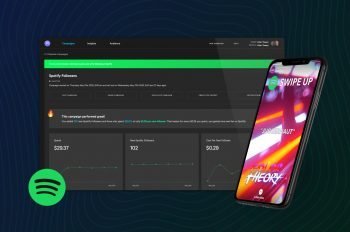