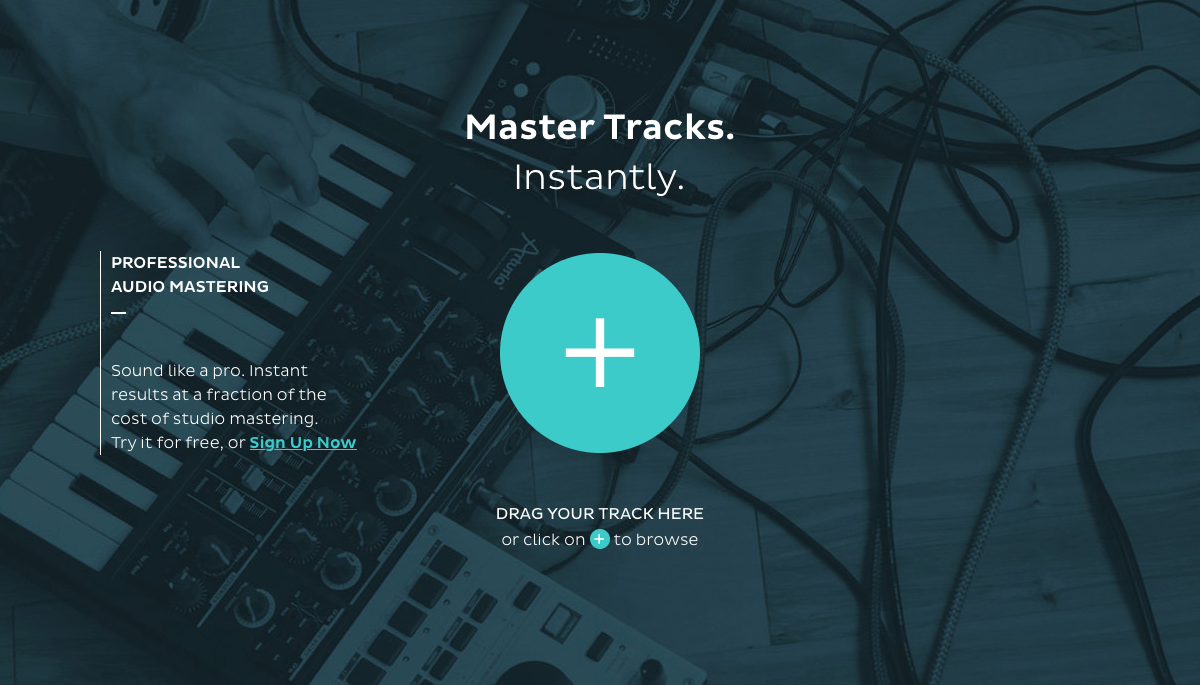 If you like what you hear, you can pay for uncompressed 16-bit .wav masters. Pricing is very reasonable at $9 for four or $19 for unlimited masters per month. Paid users also get to select the “intensity” of the mastering: low, medium (the default), or high.

Their algorithms were refined over eight years of university research, and they even have a resident astrophysicist. An astrophysicist!

Guess this mastering engineer is out of a job, right?

To find out, I selected tracks from three recent mastering jobs, to compare my results with LANDR’s.

Three notes before we get our hands dirty in this mano-a-microchip match-up:

I was asked to give it “the full EDM treatment,” which I interpreted as, “make it loud!”

Here’s a taste of the chorus, unmastered:

And here’s my master:

Is it just me, or does the LANDR version sound like it was mastered by an astrophysicist?

To my ears, the biggest problem is the lack of low end. The result is thin and narrow and just “off.”

Keep in mind, LANDR uses the same algorithm for all genres of music. This tonal balance might be perfect for folk or classical, but it doesn’t cut it for EDM, hip hop, or even pop.

On the plus side, I appreciate that LANDR doesn’t win the Loudness War by default. There’s plenty of dynamic range. Unfortunately, the track would be the quietest in any EDM playlist. It’s simply not club-ready.

Better? Not to my ears. There’s more of everything I didn’t like in the previous version – the thinness is more pronounced and the lows are even more lacking.

It’s easy to trade low frequency energy for volume. The challenge is achieving both.

Worse, this version is even more compressed (as opposed to peak limited). You can see visually how little dynamic contrast there is, compared to my master at pretty much the same volume.

Tom Cascino’s tracks feature a characteristic richness and warmth, with plenty of deep bass. Within days of mastering his album, the lead track was #1 on Hypem:

Maybe I’m reading too much into the song title, or maybe it’s the fact that Tom and I both live in California, but to me “Summer Spliffs” captures that feeling of cruising down PCH with the top down in August.

Does that character come across in the LANDR version?

This cover was pulled off an old DAT recording for a rarities and remixes release.

In this case, I find the LANDR version to be ridiculously bright, edgy, and essentially unlistenable.

Also note the break at 0:13 where it’s supposed to drop off in volume and build back up. The “quiet” part sounds just as loud, if not louder, than the “loud” part!

This track might have sounded better at the default medium intensity, but I ran out of credits. Regardless, LANDR has no way of knowing that it’s a ballad, and therefore doesn’t require the same RMS level as a club track on the same release.

Speaking of which, try playing the three LANDR high intensity samples one after the other. Would they sit together nicely on the same album? No way!

There are huge tonal and volume differences between masters at the same intensity level, relegating LANDR to one-off singles.

To be fair, LANDR is an incredibly ambitious project! It’s amazing that it performs as well as it does.

The algorithm will get better over time, but it can never replace a professional mastering engineer, because it lacks musical understanding.

It can’t know whether occasional high frequency bursts are vocal sibilants that demand de-essing, or cymbal crashes. It can’t tell if the excess energy at 200 Hz is the characteristic warmth of a rich fretless bass, or vocal mud that needs to be cut. It doesn’t even know what genre your track is in. One size fits all.

Most importantly, it can’t tell you to go back and fix your mix!

When I hear a problem best addressed in the mix, I ask the client for changes. That applies to everything from excessive sub bass to thin guitar tone to ultrasonic synth spikes to questionable vocal intonation. Maybe it’s coincidence, but my clients’ mixes tend to get better with every release.

Your mastering engineer can be, as Chris from London Exchange puts it, The Fifth Beatle. We are partners in releasing the best records possible, which often extends into areas beyond mixing, like promotional advice and track sequencing.

I think my job is safe for now.

Have you tried LANDR? What did you think? Let’s talk about it in the comments.