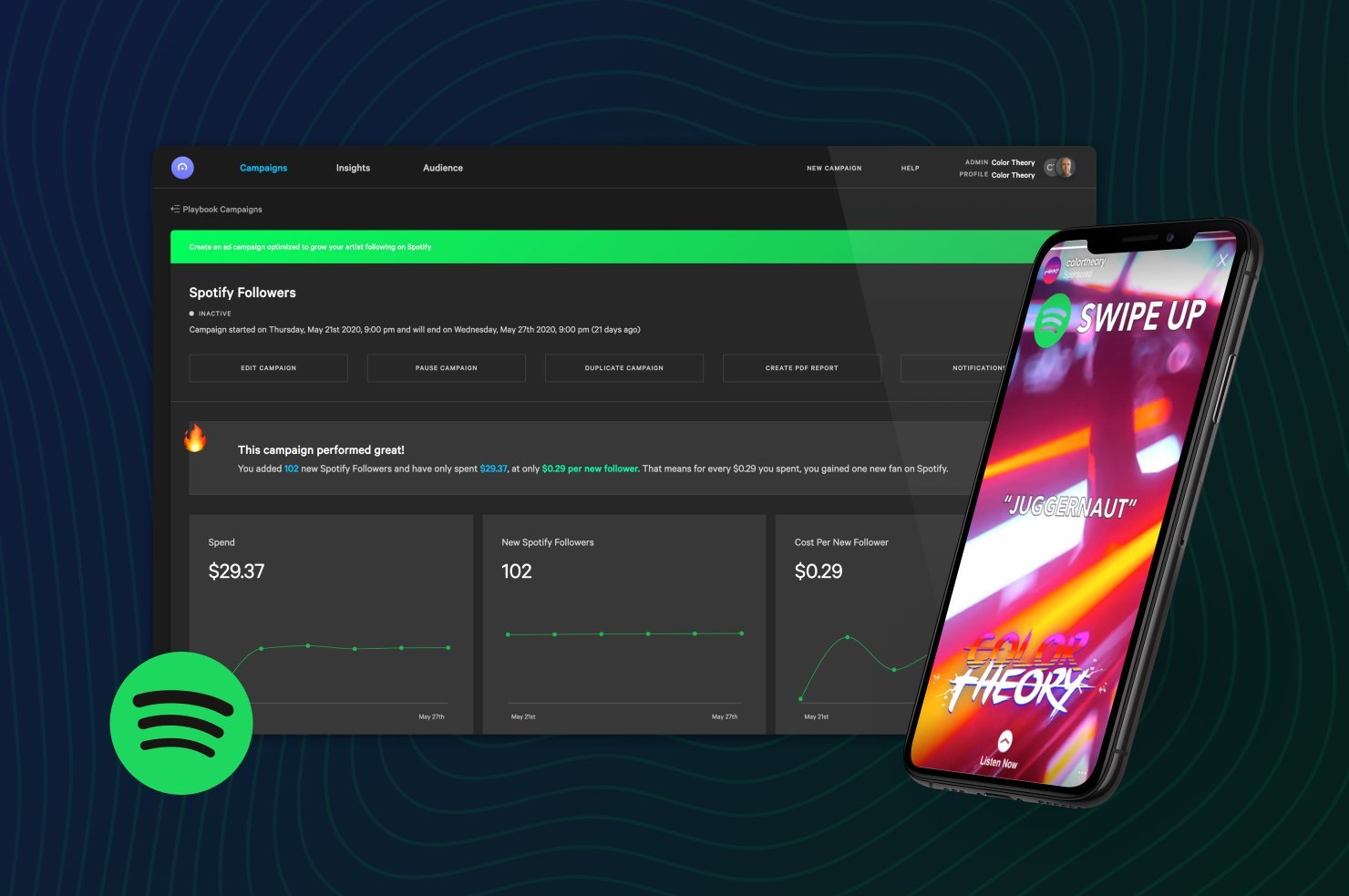 It’s been over two years since I wrote How To Promote Your Music with Facebook Ads, and it’s still one of the most popular articles on the site.

I’ve learned a lot since then, and I’m still learning! The truth is, the platform is constantly evolving, along with the Ads Manager interface. It’s hard to keep up!

What if, instead of babysitting your ads every day, you could automate the entire process, and get even better results?

Such is the promise of ToneDen, a social marketing platform built for music promotion.

Whatever your music marketing goal, ToneDen likely has a ready-made campaign for it, which they call a “playbook.”

I took their Spotify Growth for Artists playbook for a spin, which uses Instagram Stories ads to direct listeners to your artist profile. After a week when the campaign completed, I followed it up with a near-identical campaign directly on Ads Manager for comparison’s sake.

Setting Up Your ToneDen Campaign

It took mere minutes to get my campaign off the ground. It seriously couldn’t be easier.

As I’ve lamented previously, there are no good synthwave targets. Still, I was surprised when ToneDen didn’t pull in anything from Depeche Mode.

I ended up targeting Depeche Mode, Synthesizer, Retrogaming, and Synthwave. Yes, Synthwave is targetable as an interest, but Audience Insights puts it at only 1 – 1.5K people in the US.

I didn’t come up with Synthesizer and Retrogaming on a whim. I’ve tested them extensively in the past and they consistently deliver. At this point, my ad account is pretty well seasoned regardless.

Next you’ll set a geographic target, when the option becomes available. For now we’re stuck with all 70+ Spotify countries worldwide.

Enter a daily budget (I went with the minimum $5), then design your ad! There’s even a video tutorial with best practices right on the page.

Here’s what I whipped up in less than 10 minutes, using video from beeple.

In retrospect, I should’ve gone for more contrast between the type, logo, and video. Whatcha gonna do.

The audio segment, on the other hand, was already thoroughly tested in my playlist promotion campaign. I don’t know why the last two lines of a verse going into an instrumental coda works, but it does!

Review, confirm, and you’re done! ToneDen schedules the campaign, and with any luck, the ads will be approved by Facebook before it goes live.

I won’t keep you in suspense.

Keep in mind that ToneDen isn’t able to filter out organic growth, which historically is about 15 followers per week.

I’ve experimented with direct to song campaigns through Feature.fm, and ended up paying more than $0.29 per click to Spotify. And that’s just to get a user there in the first place, much less to listen or follow!

My direct to song campaigns were targeted to the countries where most of my fans are: US, UK, Canada, Germany, and Sweden. All of them are relatively expensive countries to advertise to.

ToneDen breaks up the Spotify countries into three different tiers, and then continually optimizes the ad spend based on each tier’s performance.

Not what I expected. Turns out Brazil is a Tier 1 country.

I have nothing against Brazil, but considering that US clicks cost 3-4x, I wonder if they really belong in the same tier.

Another consideration is that I can’t ship merch to fans in Brazil. There’s no First Class International option from the US, so it currently costs $33.75 to mail a 3 oz CD in digipak.

I learned this just the other day when a fan in Colombia ordered my CD and I had to refund her money.

With that in mind, I’m not sure Brazil and Argentina are the best countries for me to invest in.

Would massive engagement from Brazil and Argentina put me on the Discover Weekly playlists of US listeners?

I don’t know, and I’m not sure the hypothesis is even testable given the data that Spotify provides.

Could I Get More Spotify Followers Myself?

Honestly, I didn’t expect the campaign to work as well as it did. I knew I’d get some streams, but without a clear call to action, I didn’t expect many new followers. Maybe it would be worth testing an alternate ad that includes “follow for new songs” or something like that.

But I had a better audience up my sleeve — the lookalike I’ve been using to build my Spotify playlist. One that I wagered could handily beat ToneDen’s results, in an admittedly unfair fight.

Instead of targeting all Spotify countries, I split my $5 a day between two groups: US and Brazil + Argentina + Mexico + Chile. It’s the same setup I’ve been using in my playlist campaign.

Yeah, I accidentally ran it a day longer than my ToneDen campaign.

So, ToneDen wins? Yes, I suppose it does.

I admit defeat, but I didn’t lose by much once you factor in geography:

My cost per click for the four Spanish speaking countries was actually slightly better. The biggest difference is that I devoted half of my budget to the US.

ToneDen’s Spotify Growth for Artists playbook is the best way to get Spotify followers that I’ve tested so far.

Compare my organic follower growth vs. the ToneDen campaign vs. my own lookalike campaign:

The real beauty of the method is that people follow entirely of their own volition. They aren’t being forced to follow in order to download a track or pre-save an upcoming release.

Should you try it?

If you accept ToneDen’s premise that user engagement is valued equally, then absolutely! If you have reason to suspect otherwise, let us know in the comments.

They were kind enough to provide Passive Promotion readers with a discount code. If you sign up, I’ll earn a small commission, which will go toward future experiments!

New users get a 7-day free trial plus 10% off any subscription using code COLORTHEORY10 here.

In the meantime, I’m going to keep testing! I just launched a new campaign with different targets and four different ads.

Have you tried ToneDen? Share your results in the comments!