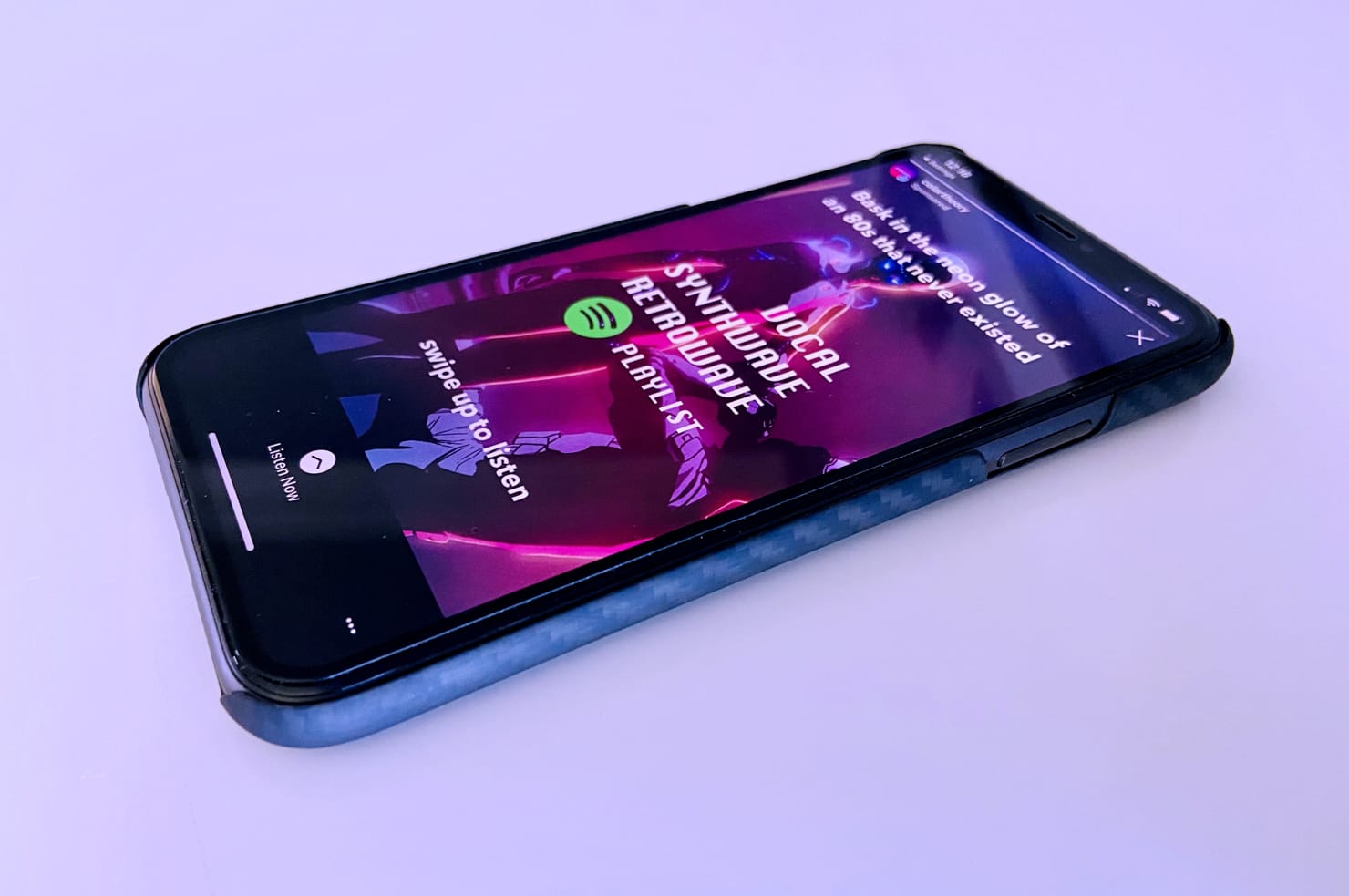 If you were wondering how I found your work, it was through Spotify. I was looking for vocal synthwave playlists. Yours had the most followers and I really enjoyed the first song.

My Spotify playlist is getting a lot of action lately. Not because the search algorithm starting picking up on it, or because it went viral on Reddit. No, I’m growing it the old-fashioned way: by paying for it.

I learned a lot in those two months, and I’m paying much less per follower now than I was at the beginning. More on that later!

The benefits of owning a popular Spotify playlist

Owning one of the top playlists in your genre offers several advantages:

Convinced yet? Here’s how I did it…

Instagram Stories ads are 15-second videos with a 9×16 aspect ratio, essentially 1080p flipped sideways. iMovie can’t do it, but it’s a breeze with ScreenFlow.

ScreenFlow is also great for making square videos, which take up more screen real estate on social media. I’m using a really old version that I bought years ago for screen capture, but it still does everything I need.

Note that it’s Mac only. If you know of any good Windows alternatives, please share them in the comments!

I just add my assets to the sidebar, drag them to the video window and/or timeline, resize them to 15 seconds, add text and “effects” (mostly just fades), and export using the following settings:

I’m sure that’s way overkill video-wise, but I love that it encodes audio at 320 kbps!

Here’s a playlist with 4 of the 24 ads I’ve tested so far. Remember that Instagram also includes a call to action (“Listen Now”) at the bottom of the screen, with a caret telling the user to swipe up.

FRAME DJ was a huge help in coming up with ideas. He noticed that “scrolling through the playlist” ads like the first were being used to build massive EDM playlists.

He also came up with “imagine the warmth of 80s synth music.” I was skeptical at first, but it outperformed the others at the time.

I’m quite proud of “it’s always midnight somewhere,” featuring the music of The Midnight. Clever, huh?

Still, I was glad that “bask in the neon glow of an 80s that never existed” performed just as well using my own music.

Facebook Ad Library is a helpful resource. There are several expensive courses on Spotify promotion that center around Instagram Stories ads. Rather than pay for them, I just looked up the relevant artists’ ads for inspiration.

Test, test, test! I can’t stress this enough. Try different songs, background images, copy, fonts, timing, you name it! Don’t forget to test which 15 seconds of your track converts best, rather than just starting at the top of the chorus.

I test each ad by letting it run solo for two days, ideally two weekdays because weekends may perform differently.

Remember that followers are the goal, not clicks. Every morning I write down my follower count and track the increase from the previous day. It should scale with clicks, but if it doesn’t, your ad may be confusing users.

I place the song from my ad, typically my own, in the top slot of the playlist so people recognize it immediately and know they’ve come to the right place. Sure, it’s self-serving, but not entirely selfish!

I won’t walk through every step in the ad creation process, because yawn. The campaign objective is traffic, and the sole placement is Instagram Stories.

I mostly targeted US, UK, Canada, New Zealand, and Australia. Once I launched my free CD campaign, which I’ll write about soon, I restricted my targeting to US-only, where I charge $5 to ship a CD rather than $15 internationally.

Eventually I opened it up to Mexico and Brazil, where I’m getting clicks for $0.04, versus $0.11 in the US. The lower cost per follower is offset by a lower payout per stream.

Ultimately I settled on splitting my geographic targeting into two ad groups at $2.50 each per day: US, and Mexico/Brazil. If I kept them in the same ad group, the latter would eat up the vast majority of my budget.

Choose your targets wisely, and for chrissakes make sure they are all countries where Spotify is available!

I’m getting about 50 new followers a day, so $0.10 per follower if we attribute all growth to the ads. That assumes that organic growth is canceled out by unfollows.

That’s because I already spent a few hundred bucks to build a lookalike audience of 75% video viewers — yet another topic for a future post! I know I previously said that lookalike audiences don’t work, but it turns out I was doing it wrong.

You’ll likely need to use interest targeting, in the form of “artists I sound like” or “my genre” plus Spotify. Remember, you want to narrow the audience using Spotify as an additional interest.

Hopefully, there are targetable artists that you sound like, or genres your music fits into cleanly. I’m not so lucky, which is why it cost so much to create that lookalike from mostly non-music-related interests.

Let’s swap places with our potential fan for a moment. Imagine you see an ad for a cool playlist, swipe up, and are greeted with this screen:

“Wait, don’t I already have the Spotify app?,” you wonder. Yes, you do, and clicking the “download app” button will open it.

We want to avoid this confusion at all costs. The solution? URLgenius.

The first 1000 clicks are free. After that, it’s a penny per click. In this case, a penny spent is more than a penny saved in cost per follower!

Here’s a URLgenius link to my playlist. Now you owe me a penny.

Do people actually listen to my playlist? Indeed they do!

Here’s my Spotify for Artists data for the top slotted track (click to enlarge):

I’ve got another track in the middle of the playlist, which only generated 436 plays over the same period.

If I consider my playlist campaign only in terms of my two songs, that’s 2K streams for $174. That’s not terrible relative to what you’d pay for Spotify PR, and I know the streams are legit!

SubmitHub to the rescue

When my playlist hit 2K followers, I made the mistake of announcing it on social media. Suddenly I was receiving submissions from every corner of the internet.

Most obviously didn’t fit, because they didn’t have vocals, or weren’t even close to synthwave. Some artists sent me full albums, or worse, directed me to their Spotify profile, expecting me to scour it for any appropriate tracks. It got to be too much, so I turned to SubmitHub:

If you’re unfamiliar with SubmitHub, you can read all about it in last month’s article. It’s a platform where curators of all stripes screen and manage submissions from artists, labels, and publicists.

I’ve always pushed back against claims that SubmitHub was payola and that curators were somehow scamming artists, but now it’s obvious how off-base those accusations are.

Once I worked through 200 submissions I was allowed to raise my price to two premium credits. Now I get $1 out of every $2 submission.

I’m currently receiving 15 submissions per day on average, making $20 per hour while falling behind on mastering and production work that pays far better.

SubmitHub is no get rich scheme.

Keep in mind that the vast majority of curators only charge a single premium credit, which is $10 per hour at my pace.

It has its perks though! Curators can purchase credits at a 50% discount. 45 minutes per day of my time covers both the cost of my playlist ads and my own artist submissions.

Feel free to submit your track to me if it has 1) great vocals (not just vocoder), 2) obvious 80s elements, 3) traditional pop structure, and 4) a synth-driven arrangement. You wouldn’t believe how many people send me instrumentals!

I think that covers the entire ecosystem!

What do you think? Is playlist promotion a viable substitute for artist promotion, at least on Spotify?

It’s definitely a ton of work, but I take pride in my playlist, and genuinely enjoy listening to it. It’s nice to be in a position where I can help other artists, rather than feeling like we’re all competing in a zero-sum contest. I suppose that goes for this blog too.

Do you curate a Spotify playlist? Have you tried Instagram Stories ads? Let’s swap strategies in the comments!