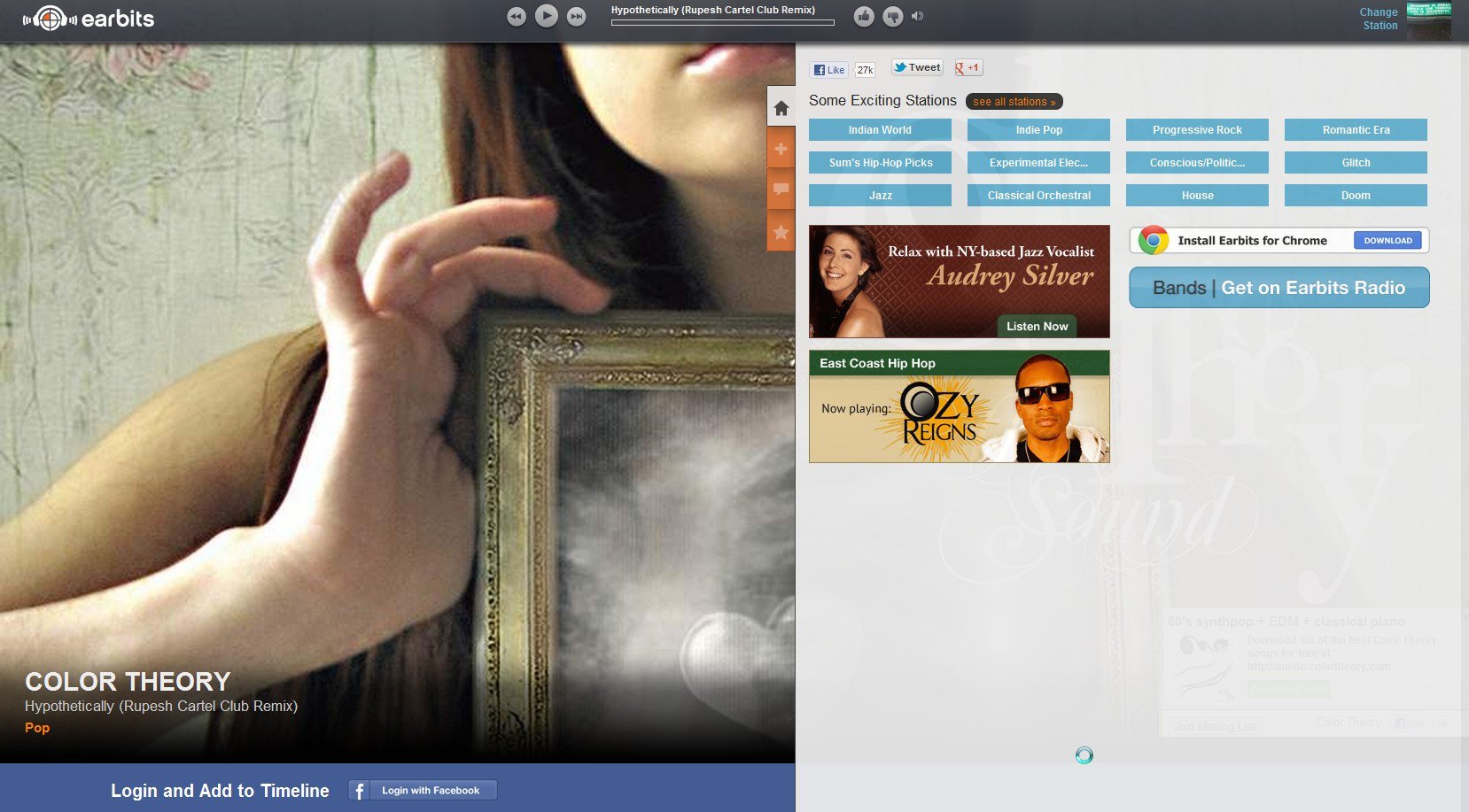 Earbits is a personalized streaming radio site focused on independents, with no ads or subscription fees. Like Jango, Last.fm, and Grooveshark, they sell airtime packages to artists. At around a penny a play, it’s a relative bargain, especially since they only charge for songs played past the 30 second mark. Put another way, $50 buys you a bare minimum of 42 listener hours.

That wouldn’t matter if there weren’t any listeners, and there wouldn’t be any listeners if Earbits were overrun with suck. Fortunately, the staff reviews and approves every artist (you can apply here). Judging from the music I’ve heard, the bar is pretty high.

On the listener end of things, the radio experience is engaging. The only “advertising” on the page relates to the band you’re listening to. A high resolution photo fills the screen, with play controls at the top and share buttons on the bottom. A bio and comments are a click away, and artists can craft a slide-out ad with whatever text they want. I’ve been linking to my free song downloads, but touring bands can target specific geographical regions to help sell tickets.

Earbits integrates with Facebook on many levels. Beyond sharing, liking, and commenting, you can invite friends to listen along with you, and your play history appears in your Facebook activity stream.

As of this writing, Earbits’ average numbers across all bands are:

I’ve spent $270 on back-to-back airtime packages since December. Because of changes in the way data is collected, my stats during the beta period are unrepresentative, but my results have been consistent over the past couple of months (click to enlarge):

For every 1,000 spins, I’m getting 13 Facebook fans and 33 clicks on my slide-out ad (the mailing list signup feature is a recent addition). I’m beating the average, but I’m nowhere near the best.

My $0.27 cost-per-click compares favorably to Facebook ads, which have ranged from $0.13 to $0.33 CPC. Even if I have to pay a little more, a click made while my song is playing is much more valuable to me.

Some people dismiss any form of pay-to-play as a scam, and consider it payola. Earbits is not a scam. You can submit your music and get free airplay – just not as much, and without the perks like slide-out ads and licensing opportunities. If you’re willing to pay for text ads on Google or Facebook, you might as well get the plays thrown in at about the same price.

Normally I’d make a few suggestions to improve the service, but things are changing by the week. Earbits just added the option to swap out the slide-out ad for a mailing list form, which I’m trying out. Soon they’ll add “layers” to the slide-out ad. For example, after a listener signs up for your mailing list, they’ll be presented with another opportunity to interact with the band.

As you can tell, I’m pretty excited about Earbits, and I plan to continue using it. You can help me do that by signing up through this link or via the banner below. I’ll get 1000 free spins and you’ll get a 10% bonus on the spins you buy. In return, I’ll keep you informed with my results and any new wacky uses I come up with, like I have with Jango (four articles over three years).

A little over two months later, my campaigns are still running strong! My current 11,000 spin campaign was funded completely through the banner above. Thanks for using it! Here are my latest stats:

I’ve been experimenting with the slide-out ad “layers,” and recently switched back to the mailing list form. That’s definitely the way to go, for me at least. I’ve had 33 mailing list adds in the past 7 days!

I’ve run campaigns pretty much continuously, and though plays have slowed down considerably, I continue to get a handful of email signups every week. Maybe things will pick up with the release of the Earbits Radio Android App.