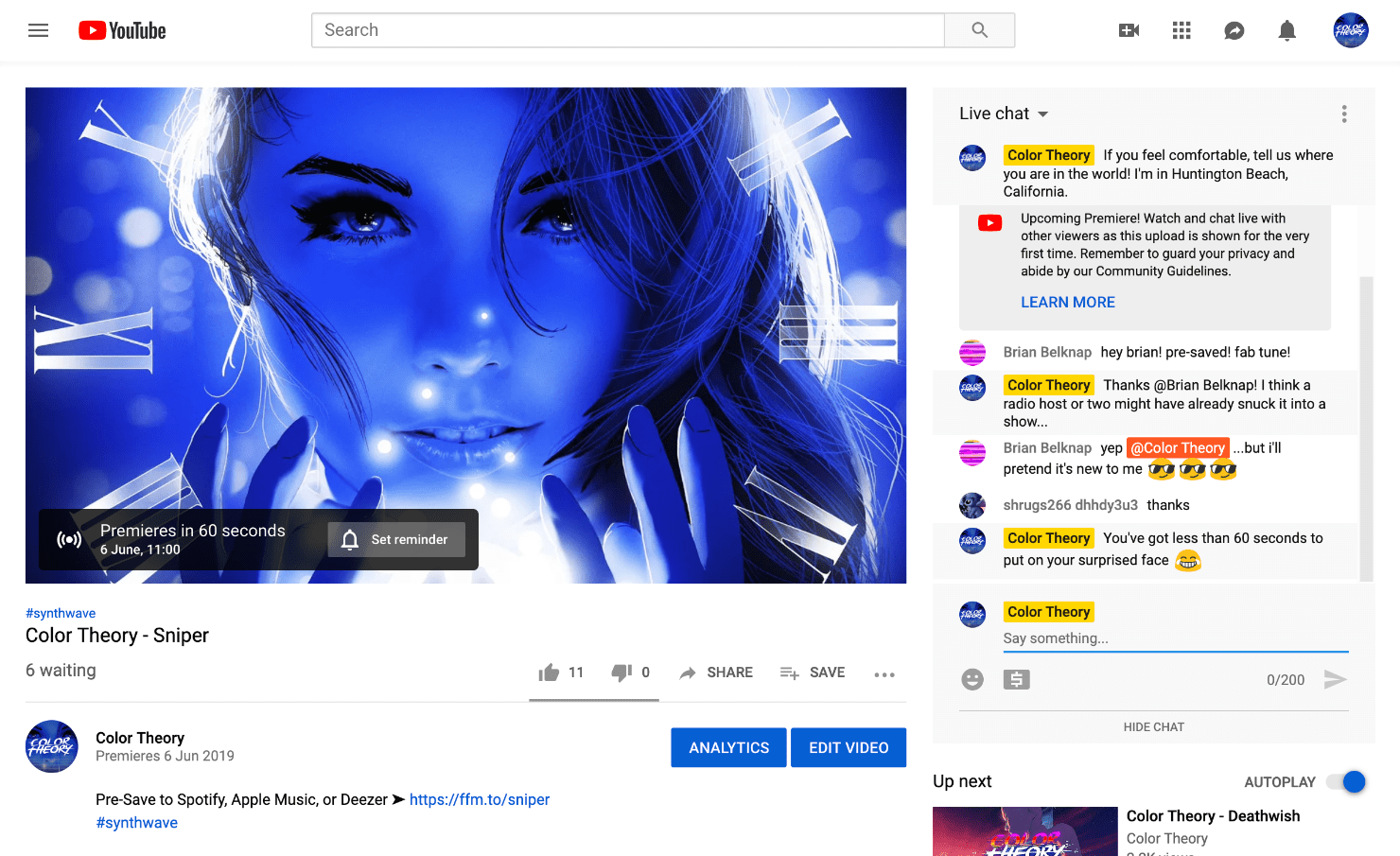 You may have noticed that whenever you schedule a video release on YouTube or Facebook, you have the option of making it a premiere. In the spirit of “why not?” I tested the feature out on both platforms to determine the premiére premiere-er. The winner, in my mind, was cliére (I’ll stop).

The idea is for you and your fans to experience the video together, all at the same time. Like a Spotify pre-save, a premiere is a vehicle to build momentum for your release. It provides another angle from which to promote your song, along with a second set of notifications for your fans — or more, if you play your cards right!

Don’t have any videos? Neither do I, but that doesn’t stop me. My song videos are simply the music slapped over the cover art in iMovie. Sites like Editframe and TunesToTube can do it for you in a jiffy.

I actually premiered two videos on YouTube. I pulled out all the stops the first time around, but didn’t think to capture any screenshots. I half-assed the most recent one but at least had the foresight to document my mediocrity.

Rather than simply rehash my experience, I’ll present my suggestions as a to-do list:

When the allotted time for your premiere finally arrives, YouTube automatically launches a two-minute countdown to build anticipation:

Then your video will play, people will say nice things, you’ll encourage them to like, subscribe, and pre-save, and eventually, when things start to feel awkward, say your goodbyes.

The premiere chat will optionally replay for future viewers unless you disable the option in YouTube Studio (under Details ➤ Advanced).

And that’s it for YouTube! The video will permanently reside at the same URL you’ve been sharing this whole time. It’s now functionally identical to any of the other videos on your channel.

My thought was, between my personal profile and artist page, I’ve got way more reach on Facebook. And by hosting the event on the same platform as the premiere, I had the potential to attract a much larger audience.

I figured that even if I just flipped the “premiere” switch, there would be enough ambient traffic on Facebook that the “premiere is live” notification alone would garner more viewers than YouTube. Wrong!

My to-do list is the same, but I hit a few snags:

First off, the video page isn’t intuitive and familiar like YouTube’s, though you can still set a reminder:

As far as I can tell, there’s no way to invite people to the premiere directly. Instead, I had to invite them to the event, with a link to the video page in the description. If there’s any advantage to hosting the video and event on the same platform, it’s lost on me.

The premiere itself didn’t go off as smoothly as it did on YouTube. Here’s how it looked on my end:

That’s not even factoring in YouTube’s Super Chat, where people can highlight their chat messages by tipping you cash in real time. Not that anyone’s ever done that for me, but they could. I mean, it’s turned on. 😅

Worst of all, the video played back automatically for some, but others had to hit the play button. I had to reload the page, then hit the play button! We were obviously out of sync, which diminished the experience. You can read about some of the other weirdness in the comments on the screenshot above.

If I had to summarize my Facebook premiere in one word, I’d go with subpar.

I said my initial YouTube premiere was successful, but that’s only true in a relative sense. The absolute numbers are less than staggering:

I could’ve sworn there were 41, but I suppose analytics don’t lie.

Let’s be real — I should be honored that anyone would add an event to their calendar just to hear my song a day early.

If you’ve got an actual video to premiere, and can tease engaging snippets of it on social media, you’re likely to bring in far more viewers than I did.

Come to think of it, that factor alone may explain the dropoff in attendance from YouTube to Facebook. The fans that attended the first YouTube premiere knew I would be debuting the same sort of cover art plus music non-video. Not that I didn’t make that clear up front!

Despite the low turnout, promoting the premieres on both platforms helped to raise awareness of the releases. So there’s that.

If I do another premiere, it’ll definitely be on YouTube.

Why wouldn’t I? Clearly the vast majority of my fans aren’t interested. I’d rather invest my limited social capital in something that better resonates with my audience.