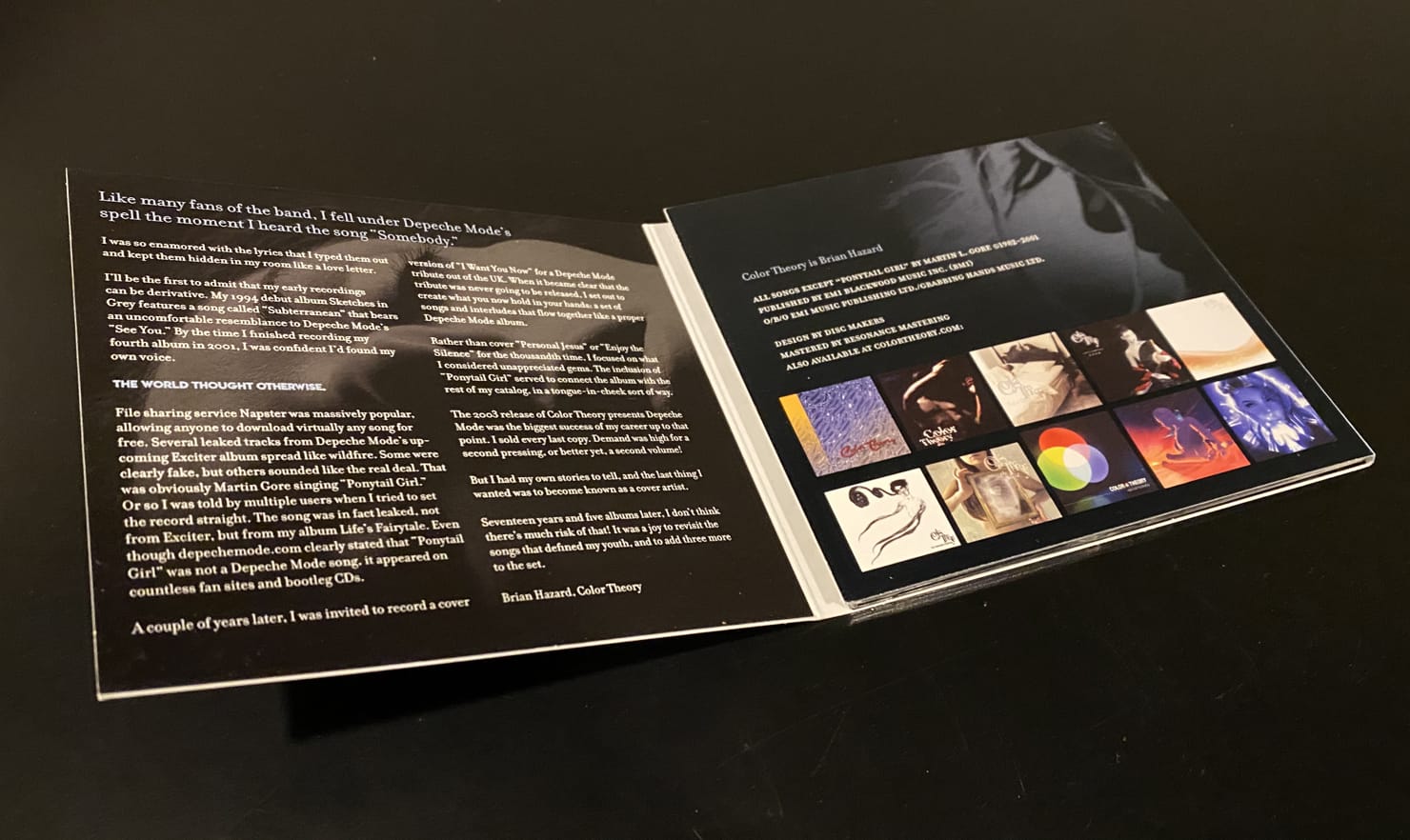 Way back in 2001, my song “Ponytail Girl” spread like wildfire on Napster, mislabeled as an unreleased Depeche Mode b-side. Turning lemons into lemonade, I used the incident as the basis for a tribute album to the band. It quickly became my top seller, and the initial CD pressing sold out.

Not wanting to become known as a “knockoff” artist, I held off on a second pressing. Seventeen years and five original albums later, I reissued Color Theory presents Depeche Mode, remastered with new artwork and three new tracks.

There are millions of Depeche Mode fans on Facebook, and I was confident this album would convince many of them to become Color Theory fans. Not one to beat around the bush, I went straight for a full-priced $14 CD sale to total strangers.

Was it a mistake? Let’s just say I haven’t cracked the code yet.

I created the following “checkout” in FunnelKit as my landing page (click to enlarge or see it in action here):

At the top is a two-minute teaser video I made in ScreenFlow:

Mind you, this wasn’t my initial layout. I started with a 30-second teaser and an offer to sign extra copies as gifts. I even enlisted my daughter to gift wrap CDs for $4, in black paper of course!

I only added free downloads offer a couple of weeks ago. When you try to leave the page on desktop, a pop-up appears offering them in exchange for an email address. Of course, I also threw in a couple of originals for good measure!

As usual, these are Sticker Mule weekly specials, with the exception of the keychain, which I reordered when my weekly special supply ran out.

When the buyer submits their order, they’re presented with a series of upsells, depending on what they’ve purchased from my store in the past.

If it wasn’t clear, I’m asking people to buy a second copy of the same album. Pretty ballsy, but for collectors who missed out on the original pressing, this is the next best thing. It beats paying $969!

Here’s where things get interesting…

I created three different funnels to trigger based on the buyer’s order history. Rather than break down the logic of each, I’ll just list all of the potential upsells in the order they’re presented:

If they haven’t already purchased one or both of my last two albums on CD, they’re offered the pair for $20.

If they accept the offer, or if they’ve purchased one or both in the past, they’re offered the “classic pack” of my three oldest CDs for $15.

Repeat purchasers are offered something they definitely didn’t already have: a downloadable rarities collection of six albums for $25, five of which aren’t on streaming services. That’s 108 tracks in total.

Finally, everyone is offered a downloadable set of remixes of the tribute tracks for $5, unless they already got it in the rarities collection.

If a first-time buyer says yes to everything, and at least one person did, it amounts to a $70 sale for 7 CDs and an album download.

It started off innocently enough with a set of messages to my patrons on Patreon, two days before Black Friday.

Then came the big day, which I referred to as a “Black Celebration” in honor of the Depeche Mode album by the same name.

People complained that the site wouldn’t work, and I couldn’t figure out why. It worked for me! Worse, I kept nagging the FunnelKit support team for help with a problem they had nothing to do with.

It turns out that Amazon Web Services had an outage that prevented the link in the email from properly resolving. I sent out a second email reassuring people that the link now worked.

Over the next four weeks, I sent out three more emails with direct calls-to-action, plus a few others unrelated to the launch. Here are metrics for all of the emails sent during the period in question (click to enlarge):

For the first 50 orders, I offered a sticker featuring fantastic cover art by Dave Pasciuto for a single I never released.

When those ran out, I offered 50 die cut roll labels featuring my original logo.

After those ran out and orders came to a grinding halt, I offered the previously mentioned free downloads. I only got 29 takers.

As a last-ditch effort, I offered a coupon code for 25% off, plus a free magnet, and I’d even sign the CD! I only got three orders between my email list and Facebook. Thanks to Drip, I was able to exclude previous purchasers.

With the exception of the two GLW sets and “Cart Abandoners,” I advertised entirely to cold audiences.

The top two interest-based ad sets were the only ones to turn a profit before factoring in my cost of goods. The lookalike audiences, which performed so well with my previous free CD offer, were a real disappointment.

The ad I pushed the hardest featured the video from the top of the landing page. I asked friends and fans on my personal profile if they would add a little comment to get the conversation started. I expected a handful, but I got over fifty within the first day! The social proof on the post was better than I could’ve imagined, but it just didn’t convert.

If I had stopped after the first couple of weeks, I might have seen a 2x return on ad spend. Instead, I kept testing and crossing my fingers and waiting until I finally gave up and pulled the plug.

I tested several different ad formats, including straight-up search ads, but nothing worked. In fact, I never registered a conversion so I’m not even sure my ads were set up properly.

Google Analytics reports $184 in referral revenue from YouTube. That’s nowhere near what I spent, but the ads also generated views, comments, and subscribers on my channel.

I netted $3578 in the month since Black Friday, before costs (click to enlarge):

Google Analytics shows the same numbers except for a $28 refund it couldn’t have known about (click to enlarge):

Granted, I sold a few other CDs too, but the math is already messy enough.

It would be wonderful if I had enough CD buying email subscribers to sell 1000 copies to them directly. I wouldn’t even bother advertising!

I considered offering a digital edition, but that would’ve cut into CD sales. As much as I want the three bonus tracks to be exclusive to the CD, I may need to reconsider if I hope to convert Depeche Mode fans outside the US who are unlikely to pony up the $15 shipping cost.

I’m still convinced that this tribute album is my best introduction to potential fans. One way or another, I’m going to figure out how to sell these CDs, and then share the rest of my catalog to buyers over time.

Maybe that means offering free downloads in exchange for an email address and following up with a coupon code. If that doesn’t work, I may have to resort to another free CD campaign, but not with an album that costs $3.52 per unit to produce!

Speaking of free CD buyers, 45 of them bought the tribute at full price:

And 44 of them placed orders in my last preorder campaign. Clearly, these are genuine fans, not just freebie seekers.

Ah well, back to the drawing board.


Color Theory · Death of You w/MAIN