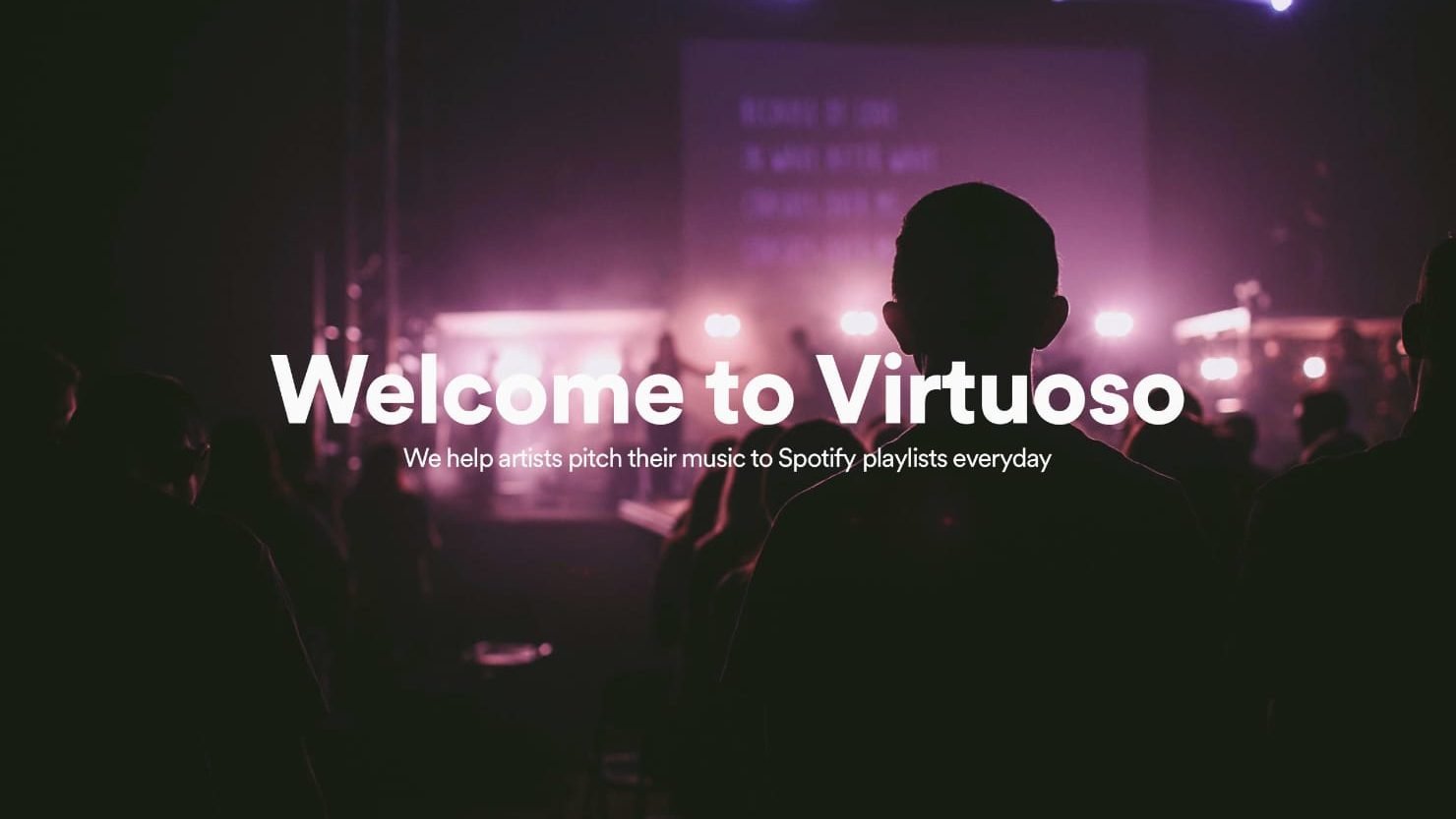 It’s always a good sign when a Spotify PR company rejects your song. It means they’re selective, a prerequisite to establishing fruitful relationships with influential curators.

Virtuoso Music rejected my first submission, so I sent them three more. To my relief, they approved one of them:

We really love “In Motion” and we think that has a really good placement potential based on our curator’s list. Amazing work on the unique production and on the extremely catchy vocals.

Note that they only guarantee the number of playlist placements and the reach of those playlists, not the number of streams. Another good sign!

The prices are in Euro, so a standard campaign is just shy of $800 US.

You’ll recall that I thought my $500 Deezer campaign was financially reckless, so I asked if I might get a discount in return for writing a review of the service.

Nope! And no discount code for you guys either. 😭

But hey, I’d be making some of that money back in royalties, right? So of course I pulled the trigger, or we wouldn’t be here.

Four days after paying, my campaign started off with a bang! Four weeks later, it ended with a whimper.

What I mean is, my song was added to all the playlists on day one, and removed from all of them on day 29. With a few minor exceptions, the campaign was perfectly choreographed.

Here’s a list of past playlists from Chartmetric, the day after the campaign ended. All but one of the placements were through Virtuoso.

Note the number of listeners for each playlist, and the reasonable follower growth. Looks legit so far.

That’s a lot of streams! For me, anyway.

The country breakdown looks not only legit, but desirable. Historically my top fan locations are US, UK, Sweden, Germany, and Canada.

The city breakdown looks solid too. Big, recognizable cities in the top countries listed above.

Here’s the report provided by Virtuoso (click to enlarge):

Did they deliver what they promised? Hell yeah!

And again, my song was insta-added to 15 playlists, including many of the same ones, and dropped like a bad habit the day after the campaign ended.

Here’s the second report from Virtuoso (click to enlarge):

As you can see, the results were very much in line with my first campaign.

To summarize, both campaigns yielded approximately 90K plays in four weeks for $800.

That’s a lot better than I expected going in!

My second campaign ended in July, but I waited until I received royalties for the first one before writing this article. I estimate I received $400 as a result of that campaign.

Is Virtuoso Music Spotify promotion right for you?

If you’ve got $800 burning a hole in your pocket, and you just want some big numbers on your Spotify profile, definitely.

For the rest of us, the answer isn’t so clear cut.

The big problem is save rates.

For both tracks it was around 2%. I actually released an inferior version of “In Motion” as a single prior to the campaign, and it had a 7.5% save rate with 11.7K plays, most of those from small playlists and listener libraries.

If a track’s save rate is high enough, and the audience clearly defined, it can make it onto algorithmic playlists like Discover Weekly. A recent single of mine has 16.4K Discover Weekly plays and counting, which are precision targeted to reach the people who are most receptive to my music.

So what are we teaching Spotify when our track has a high play count and a low save rate?

That the track sucks.

In this case, I can think of two reasons why the save rate is so low:

Looking at the first campaign, maybe five of the playlists are logical choices. Only Suicide Sheep and Eighties Ultimate Collection are center of the bullseye, setting aside the fact that my song isn’t actually from the 80s.

Bottom line, these aren’t the sorts of playlists fans of my genre listen to for discovery.

Midway through the first campaign, November47 messaged me on Facebook to ask if I was testing Virtuoso, after noticing we were on a lot of the same playlists, so I looked his track up on Chartmetric.

As of today, both he and the other artist on the track are hovering around 230 monthly listeners, so clearly the campaign didn’t have a lasting effect.

He describes his experience thusly:

Since our campaign ended, they took us out of all but a handful of playlists (4 or 5 I think).  We’ve gotten almost zero plays outside of that – maybe 20+ plays per month that are organic.  It didn’t do us any good AT ALL.  Well I guess 69,000 plays still looks better than “< 1000” but that would only matter if anyone were aware of it – which was the reason we used them in the first place.

I, on the other hand, was unceremoniously dropped from all of the playlists both times.

You may have noticed that most of my plays came from the same three curators: Laura Taylor, ghost, and vic_s. That’s not necessarily a problem, but it prompted me to ask Virtuoso if they owned the playlists. They confirmed that they “don’t have direct access to these playlists.”

One of my tracks was on Laura Taylor’s Drive Soundtrack for awhile last year, with no promotion, so I know at least back then she was actively curating.

Clearly there’s more detective work to be done, if one were so inclined.

Okay, so I can’t expect algorithmic plays, but does it really matter if I’m making new fans?

That’s the thing — I didn’t actually make any new fans that I can tell.

Each of my two tracks got approximately 1.8K saves, but in both cases the streams came to a halt once the campaign ended.

I have little reason to believe the trajectory of my career was altered in any meaningful way.

So, should you try Virtuoso? I suppose it depends what your goals are.

I can’t really complain. If anything, they overdelivered.

The low save count may just be the nature of the beast with huge non-genre focused playlists. Maybe I should’ve chosen an older song whose algorithmic opportunities had long passed.

Would you have more luck pitching to curators directly through Playlist Push and/or SubmitHub?

Possibly, but there are no guarantees beyond the fact that your track probably won’t be dropped on the 29th day. 😜

If you’d like to try Virtuoso for yourself, just click on the “submit your music” link at the top of this page, and let them know I sent you!

Be on the lookout for another Spotify PR Spotlight post in the near future. The adventure continues!

Have you tried Virtuoso for Spotify promotion, or any other Spotify PR service? Share your results in the comments!